I Think I Have Mastered Scalloped Potatoes 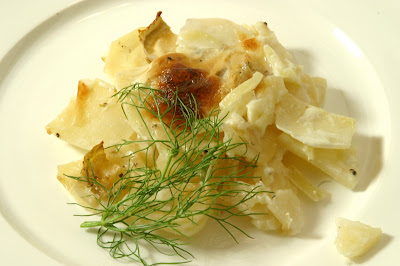 I had a wonderful chat with my friend Eileen awhile ago.  Of course the conversation always ends up in the kitchen.  She was bemoaning her scalloped potatoes for her Easter dinner.  I, too, have never been able to accomplish this simple and ubiquitous dish.  Now that I am in small town Saskatchewan I must at least know how to make scalloped potatoes.  So began my quest.

The biggest problem that we both have is that the milk curdles.  I mean, why does it seem so difficult to us and the rest of the farm ladies just throw it together so easily.  They don't even begin with a roux.

One of my favourite on-line sources of recipes is Epicurious.com.  They  had about 3 pages of recipes but I don't want a fancy city style scalloped potatoes with exotic cheeses.  When I was a kid, cheese was not even seldom used, it was never used.

Perhaps I was slicing the potatoes too thickly.  The recipes all seem to say 1/8" thick.  That is very thinly sliced.  And I have seen reference to "drying with a kitchen towel" before assembling.

Take #1              This recipe says not to use a glass dish so I used my adorable little individual cast-iron Le Creuset pots.  I love these little cocottes.  I use them for roasted vegetables, stews, hot dips...absolutely everything.  Makes serving a snap and keeps the food hot. 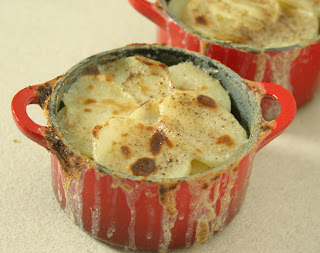 
3/4 t grated nutmeg
2 t salt
¾ t pepper
3 pounds large boiling potatoes (about 6)
3 T unsalted butter, cut into small cubes
2 c half and half cream
Preheat oven to 350°F with rack in upper third. Generously butter a 2 1/2-quart shallow baking dish (not glass).
Stir together nutmeg, salt, and pepper.
Peel and thinly slice potatoes. Layer potatoes in baking dish, overlapping slightly and sprinkling each layer with some of salt mixture and some of butter. Pour cream over potatoes, pressing down gently to submerge potatoes in liquid. 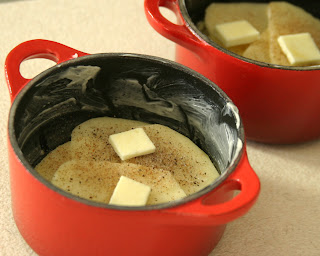 Cover with foil and bake until potatoes are tender, 1 to 1 1/4 hours.
Remove gratin from oven and discard foil. Turn broiler on and broil gratin 2 to 3 inches from heat until top is browned in spots, 3 to 5 minutes.
Let stand 10 minutes before serving.
Cooks' note: Potatoes are best the day they're made but can be baked and broiled 2 days ahead and chilled, uncovered, until cool, then covered. Reheat, covered, in a 350°F oven about 40 minutes. 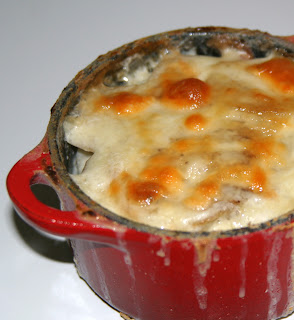 Critique:  The flavour was good and there was very little curdling.  So much of the cream bubbled out during the cooking that it was very dry and dense.  It was not as creamy as I would like.  I am using a different oven so perhaps it is too hot.  This would cause excessive bubbling over.  But, honestly, it there were a few onions in it and a tad more pepper, it would be very good.  This picture is the same scalloped potatoes, reheated.  I added a little cream and put a slice of provolone cheese on top.  Much better but a little curdling.


Take #2    Fennel seems to be a common ingredient these days.  And, it is readily available, even here in the small town.  I like the idea of fennel.

As I read many comments from people who truly make good scalloped potatoes, I still couldn't recognize what I was doing wrong.  The most common threads were:
- slice the potatoes evenly
- don't use an oven temperature that is too high.  350F is the maximum that is mostly successful
- use a high fat cream.  The higher the fat content, the less protein and the less chance of curdling.  I used half and half (10%) in this recipe
- it didn't seem to matter what flavourings you like, onion, fennel, cheese
- don't layer the potatoes too thick. Layer only 3 slices deep.
- only add the milk or cream to just below the surface of the potatoes.  Cover tightly with aluminum foil.  Remove the foil for the last 20 minutes so the top can brown.


Critique:  These were just about perfect!  They did boil over a bit even though I didn't overfill with cream.  I guess you really only fill to the halfway mark.  Add some cream near the end so they are moister.  There was no curdling and the texture was great.  The fennel flavour was very mild but 'there'.  You could easily substitute with sweet onion.  I baked at 325F because I don't trust this oven.  I thought better to be too low than too high a temperature.
Posted by Sarah at 8:00 AM

Email ThisBlogThis!Share to TwitterShare to FacebookShare to Pinterest
Labels: vegetables