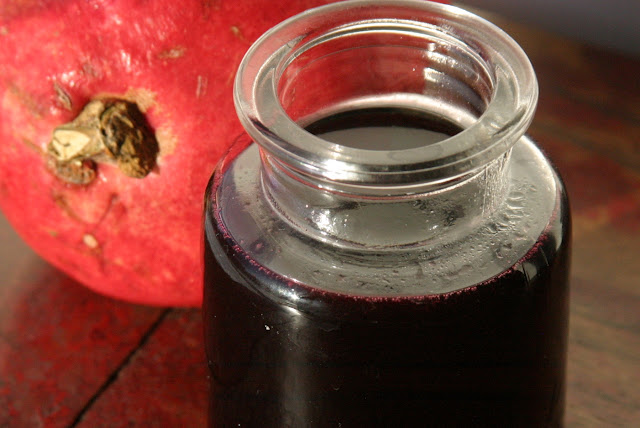 I have 15 cups of freshly squeezed pomegranate juice.  See how I did it here.  My first project was pomegranate jelly.  For that I used the clearest juice.  I am reserving the juice that is less clear for granita in a couple of weeks.  The juice will be frozen until I need it.  Today I decided to make grenadine.  Grenadine is pomegranate syrup.  It is a common ingredient in fruity cocktails and often used in barbecue sauces used with pork or chicken.  It can be used with other sauces for pork or chicken.  It would also be nice with pears and apples. 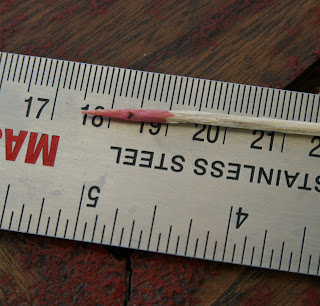 I don't use it very often and have never tasted a homemade grenadine.  This only took 15 minutes to make and I will store it in my refrigerator or freezer until I use it.

You will read in the recipe to reduce the pomegranate juice until half the volume.  This has always been a challenge for me to decide when it has reduced the proper amount.  Today I had a brainwave and measured the depth with a toothpick.  I marked the halfway point and used it to judge my reduction.  It is a very deep ruby red and not as pure red as store bought grenadine but the flavour is amazing.

1. Bring 2 cups of pomegranate juice to a boil.

2. Lower heat and simmer until it reduces in half. You can let it reduce more that half if you want it to be a bit thicker.

3. Add 1 cup of sugar and let it dissolve and bring back to a boil.

Email ThisBlogThis!Share to TwitterShare to FacebookShare to Pinterest
Labels: fruit