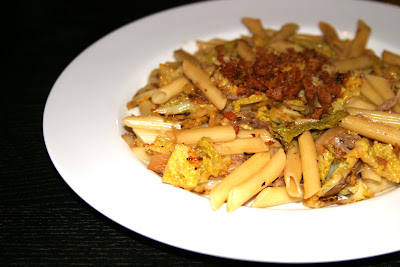 Before we talk about food I have to do something special to celebrate New Year's Eve. I am not going to get sappy about the wonderful or difficult or whatever type of year it was in 2009.  Nor will I opine about the promise of 2010.  I want to look again at Susan Boyle!  Didn't she make 2009 wonderful!  I think so.  Let's listen to her one more time.

I found the smallest Savoy cabbage that I have ever seen!  But since I am cooking for one, it was perfect.  Savoy cabbage is great for making cabbage rolls but you would require a large head for that use.

My friend, Scott, told me he makes a nice duck dish with cabbage.  I thought I would try this recipe.  I am still using my confit, although I don't have very much left.  My dish might be a little shy on the confit but I still wanted to try it and see how the flavours worked.  And I am using penne rather than the suggestion in the recipe.

Heat oil in a 12-inch heavy skillet over moderate heat until hot but not smoking, then sear duck legs, starting skin sides down and turning over once, until skin is golden and some of fat is rendered, 6 to 8 minutes total. Transfer to a cutting board, reserving skillet. When duck legs are cool enough to handle, remove skin and scrape off and reserve any visible fat, then cut skin into roughly 1/4-inch pieces. Return skin and fat to skillet and cook over moderate heat, stirring occasionally and pressing down on larger pieces, until fat is rendered and cracklings are golden and crisp, about 5 minutes. Transfer cracklings with a slotted spoon to paper towels to drain.
While cracklings cook, pull duck meat from legs into roughly 1/4-inch-thick strips, discarding bones and any gristle.
Reserve 2 tablespoons fat in skillet, discarding remainder, then cook onions with 1/2 teaspoon salt over moderate heat, stirring occasionally, until golden brown, 15 to 20 minutes. Add cabbage and 1/2 teaspoon salt and cook, stirring and turning occasionally with tongs, until cabbage is slightly wilted, about 5 minutes. Add wine and cook, stirring, until evaporated, about 2 minutes. Add chicken broth and simmer, covered, stirring occasionally, until cabbage is very tender, 25 to 30 minutes.
While cabbage simmers, cook pasta in a 6- to 8-quart pot of boiling salted water until al dente. Reserve 1 cup pasta-cooking water, then drain pasta in a colander.
Transfer cabbage mixture to pasta pot along with butter and shredded duck and cook over moderate heat, stirring, until butter is melted and duck is heated through. Stir in pasta, parsley, and pepper until combined. (If pasta looks dry, stir in some of cooking water.) Season with salt and serve cracklings on the side (for sprinkling over pasta).
Posted by Sarah at 7:00 AM