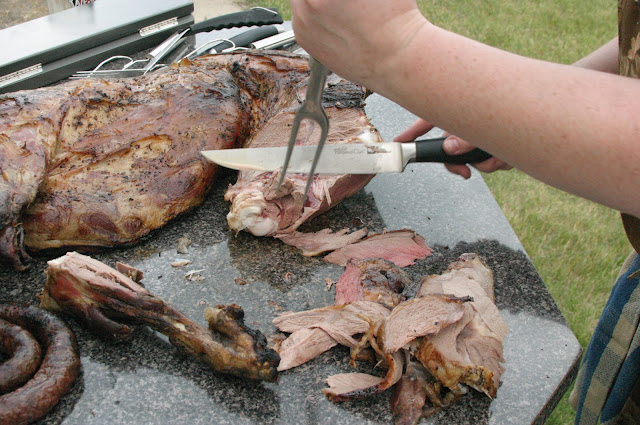 I wish that 40 years ago someone would have told me that my school friends would be friends for the rest of my life. I see it for myself and I can now watch it unfold for my nieces and nephews.

I think I would have listened. Perhaps I should tell them.

My friend Sarah, who is my namesake, hosted a most amazing 40th Anniversary Party for her parents, Greg and Adele. I went to university with her mom and we were roommates one year. We both graduated with a Bachelor of Science in Home Economics. Adele was the consummate student. I remember her studying until 4 am many nights. I could barely stay awake past midnight.

Adele and Greg farm north of Regina near the Qu'Appelle Valley in a most beautiful part of Saskatchewan. They live on the family farmstead and are a Century Farm. That means the family has had this piece of land for over 100 years and have continuously worked the land. It is a milestone in our part of the country. It is a point of pride. After all, farming is not the easiest business.

The 'Four Musketeers', as we should be called,  enjoyed the event. Betty, Glenda, Adele and I graduated together and spent a lot of time together while in university. We are together again. Glenda was Adele's bridesmaid and she wore 'the' dress.
Good for her that she can still wear it! I wore my Bulyea Hotel ball cap. Bulyea is a village near the farm. I bought that at their 25th anniversary party. Betty and I 'slept there'. I am here to say that any ideas that you may have about a village hotel are true. I cannot believe we crawled into their bed. Others did not. But I have the cap as a badge to wear at every anniversary party into the future.


Sarah now lives in Gramma's house in the same farm yard. It is a quaint home and just lovely. I am remiss in having only taken pictures of the pièce de resistance. Sarah roasted a half lamb over embers. She had seen lamb roasted in Uruguay. It was a 4 hour slow roast and turned out perfectly. Sister-in-laws and friends supplied a multitude of salads. Sarah also grilled burgers, ribs and chicken wings.

The weather could not have been better. It was hot without wind or rain. The farm is blessed with several shade trees.


I was delighted to bring a large box of saskatoon and white chocolate scones. They provided an easy breakfast for those who stayed over or camped in their beautiful yard.

Email ThisBlogThis!Share to TwitterShare to FacebookShare to Pinterest
Labels: lamb