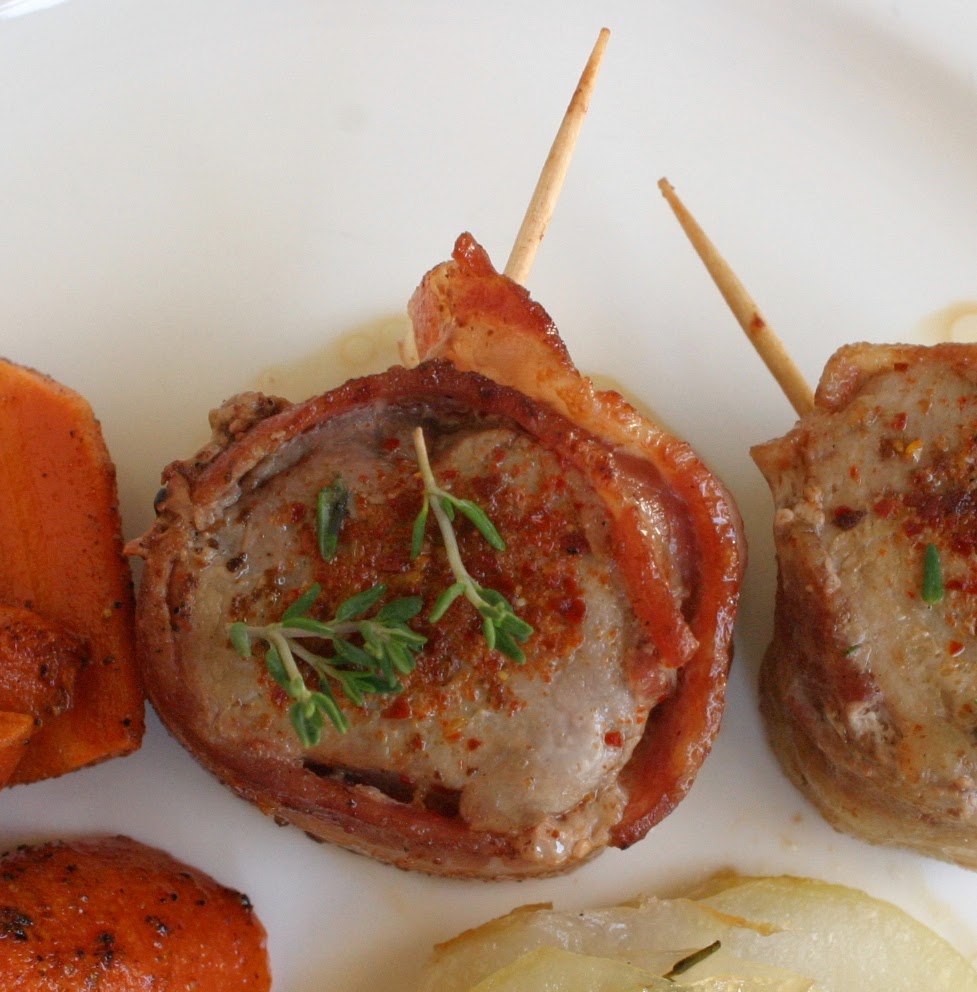 As I organize and make list after list for my upcoming drive to Victoria, BC (read 'seafood') I am still reminded by tummy growls that I must make food. I am a recovered hoarder and now check my freezer first before planning meals. I have a beautiful naturally raised pork tenderloin from Carmen Corner Meats in Waldheim, SK. And I still have market potatoes and carrots.

Rather than grill up the entire tenderloin as I usually do I decided to cut it into medallions and then pan grill. After making this recipe I have decided that it is a good one to make for a crowd. It is relatively inexpensive yet looks elegant. It can be prepped in advance and cooked all at once in a large pan. If I was catering this would be on my menu for sure.

Pommes Anna, obviously a French version of a potato dish, has been cropping up a lot lately. Ditto this for a crowd. I made mine in a muffin tin for an individual size serving but it could also be made in a pan and cut into squares for serving.

I like easy peasey recipes and have also been wanting to play with my piment d'esplette that I purchased back in the spring. Time flies, doesn't it. I have already kept it long enough. Ground spices and herbs have a shelf life of up to 2 years. Some say 12 months.

Piment d'esplette is the champagne of hot chiles in more way than one. It is a chili pepper that is cultivated in the Basque region of France in the Atlantic Pyrenees. These peppers were introduced from Mexico in the 16th century. Initially they were used medicinally but later became a staple in flavouring their food. Now it has AOC status. This is appellation d'origine de contrȏlée which translates to 'controlled designation of origin'. So you see, it is like champagne. Unless it comes from the Esplette region it cannot have this name.

What is so special about this chile, you say? It is only 4000 on the Scoville scale of heat so it isn't that hot but it is packed with flavour. It has a slightly smokey flavour. It has replaced black pepper in many Basque recipes. Remove tenderloin from the refrigerator about 30 minutes before you will be cooking. Season generously with piment d'esplette and sea salt. Cut into medallions the thickness of the bacon slice.

Slowly sauté slices of bacon in a heavy grill pan or cast iron pan until browned but not crispy. If they are too crispy they won't wrap around the medallions. Wrap medallions with the bacon pieces and secure with a toothpick. Season both top and bottom of the medallion with more piment d'esplette and sea salt. It is a thick piece of meat and the seasoning has to compensate for that so be liberal.

Over medium heat in the same pan used for the bacon place the medallions flat side down and sauté until bottom is golden, about 3 or 4 minutes. Turn over and brown the other side. Place the pan in the oven and continue to cook until the meat is no longer pink in the centre. An internal temperature of 145 F is ideal. Remove from the oven and tent with foil until ready to serve. 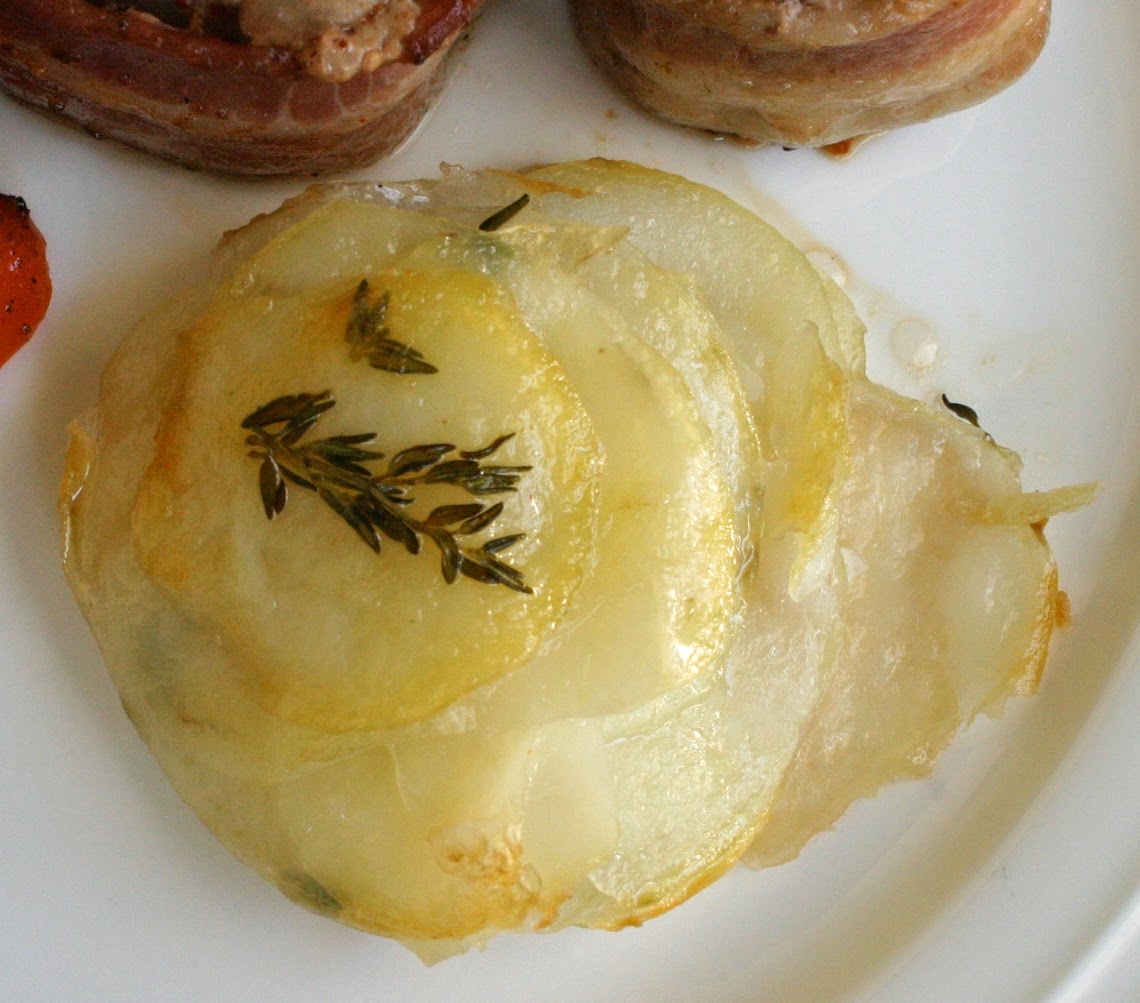 Peel potatoes and slice with a mandoline so they are almost transparent thin. I don't have a mandolin so I used my box grater. You know, that side you never use? It worked perfectly to make very thin slices.

Melt butter and brush each muffin tin with the butter. Place a round piece of parchment paper on the bottom of each muffin. Place a small sprig of thyme and then drizzle about half a teaspoon of butter in each cup.

Add minced garlic and more chopped thyme to the butter.

If you are not immediately using the sliced potatoes put them in a bowl of cold water. If left in the air they may discolour. Before using, drain the water and dry the potatoes in a clean tea towel. Place in a bowl and drizzle with the seasoned butter and mix well.

Arrange the potato sliced in each muffin cup. Press down and fill as high as possible. It will wilt down during cooking. Cover tightly with tin foil and bake in 350 F oven for about 15 minutes. Remove the foil and bake for another 15 minutes or until tender and nicely browned on the edges.

Email ThisBlogThis!Share to TwitterShare to FacebookShare to Pinterest
Labels: dinner for one, pork, potatoes