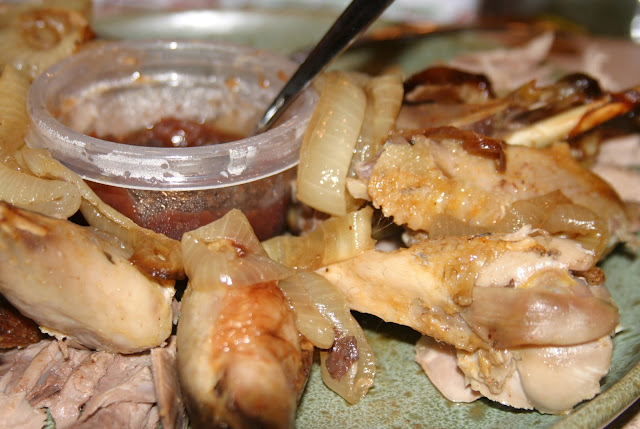 This is another contribution to our Wild Night on December 23. I brined the pheasant and then followed this recipe from Hunter Angler Gardener Cook. It was delicious! There was more meat on the birds than I had expected. I served it with my home preserved Gooseberry Chutney.
We also enjoyed moose roast, venison sausage, spicy moose sausage and saskatoon berry pie with homemade vanilla bean ice cream. 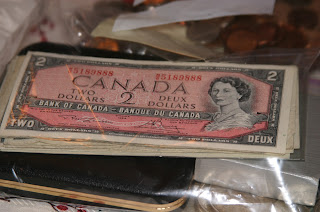 My father has been collecting coins for as long as I can remember. Now he felt it was time to pass them on to us. We spent about two hours going through everything from Meat Ration Tokens from WWII, to shinplaster, Two Dollar American paper bills to turn of the century coins. Thanks, Dad! It was fun.

Mix salt and water together. Whisk to dissolve salt. When it is dissolved, pour it over the pheasant in a plastic bag. Leave in refrigerator for 4 - 8 hours. Remove and pat dry. Let it rest on a cutting board while the oven heats to 450F.

Put sage in pheasant cavity and dust the bird with cayenne. Place sliced carrots, celery and onion on the bottom of the pan and place pheasant atop this.

Remove to a cutting board and tent with foil for 10 - 15 minutes. Carve and serve.

Gooseberry chutney   adapted from blog Senses in the Kitchen

Place all of the above in heavy based pan and bring to boil. Turn the heat down and simmer for about 1.5 hrs. Occasionally stir, gently so you do not break up gooseberries too much. Keep an eye on it on last 15 minutes, stirring more often, so it prevents the chutney to catch and burn.

Place hot chutney in sterilised jars, seal and turn up side down. Leave it to cool down and store in cool, dark place. Allow to mature for about 2 months.
Posted by Sarah at 10:37 AM