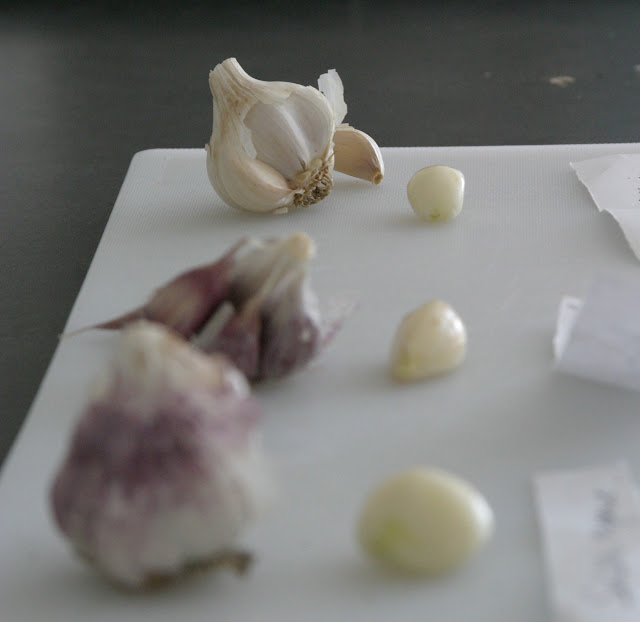 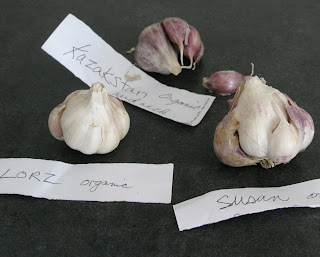 A while back, my friend Val brought some organic garlic to a cooking class - "farm grown garlic from a friend's garden".  Three different kinds were on the menu.  "I would like to hear what you think,"  she commented upon giving me three little bags labeled Susan, Kazakhstan and Lorz.  "My friends think they all taste the same." 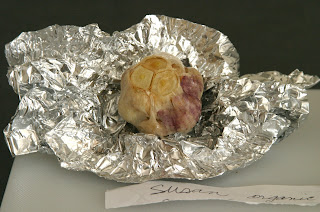 I created a little chart for comparison purposes.  I compared appearance, aroma in the raw state, flavour - sauteed chips and roasted.

In addition I also tasted garlic that I had purchased at the Salt Spring Island market when I was on vacation last summer.

I have often dreamed about being a 'taster'!  However, garlic was not on my radar!  It is interesting.  Cleansing the palate between tastes is a challenge.  I made naan yesterday and ate a small piece of it along with a drink of water.  Plus I waited awhile between tastes.

Researching garlic is fascinating but it is difficult to know if you are comparing apples with apples with all the different names they are given.  Lorz is an Italian garlic.  It is touted to be sweeter and milder.  Susan is probably Susanville.  It is grown in California.  It is probably what we are usually buying at the supermarket.

The farm garlic varietals I am tasting are Susan, Kazakhstan and Lorz.  Here is what I thought -

The Susan was white with purple in the papery covering.  The raw flesh was yellowy white.  The raw state had a very mild aroma.  It was the  mildest of all the garlics.  After sauteeing the sliced garlic in olive oil, I found the flavour to be strong and bitter.  After roasting, it was also the strongest of the three.  The individual cloves were the largest of the three.

Kazakhstan had a papery covering that was mostly purple.  The cloves were of medium size.  The flesh was the yellowest of of all.  The sauteed garlic chips were mild and sweet.  After roasting it was mild and sweet.

Lorz was all papery white.  The flesh was the whitest.  The cloves the smallest.  After making sauteed chips, the flavour was mild with a bitter aftertaste.  After roasting, it was very bland. 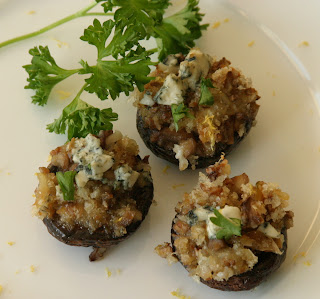 Remove the stems from the mushrooms and chop finely.  Toss them in a pan with a little olive oil and the mashed cloves of garlic.  Saute until tender.  Ad the panko and continue to cook until they are toasted.  Remove from heat.  Grate in some parmesan cheese and toss.  Season with salt and pepper.

In another pan, saute the mushroom caps in olive oil for a few minutes then fill with the mushroom stem and panko mixture.  Top with crumbled blue cheese.  Bake for 15 minutes or until lightly browned.  Garnish with lemon zest and fresh parsley.  Serve immediately.
Posted by Sarah at 4:53 PM