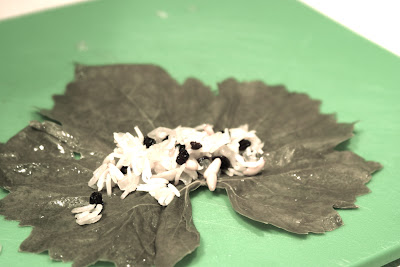 Our October 2010 hostess, Lori of Lori’s Lipsmacking Goodness, has challenged The Daring Cooks to stuff grape leaves. Lori chose a recipe from Aromas of Aleppo and a recipe from The New Book of Middle Eastern Food.

Stuffed grape leaves are a part of many cultures including the Syrians, the Turks, the Greeks, the Lebanese, the Albanians, the Israeli's, the Iranians, the Iraqis and the Armenians (just to name a few). Generally speaking the stuffed part could be in zucchinis/courgette, eggplant, tomato or peppers. Really it also extends to stuffing certain types of fish as well. It is suggested that the origin of stuffed grape leaves goes back to the time when Alexander the Great besieged Thebes. It has also been suggested the Byzantines refined and spiced up the recipe and used the leaves of other vines such as hazelnuts and figs.

I decided to use my old favourite recipe.  I love the sweetness from currants and flavour of pinenuts. 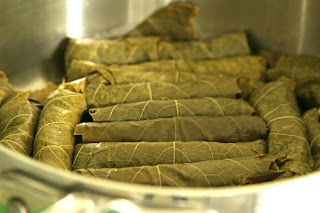 In a heavy large skillet, heat  3 tablespoons of the olive oil over moderate heat until a light haze forms above it.  Add the onions and, stirring frequently, cook for 5 minutes, or until they are soft and transparent but not brown.  Add the rice and stir constantly for 2 to 3 minutes, or until the grains are coated with oil.  Do not let them brown.  Pour in the water, add the salt and a few grindings of pepper and bring to a boil over high heat.  Reduce the heat to low, cover tightly, and simmer for about 15 minutes, or until the rice is tender and has absorbed all the liquid.  In a small skillet, heat 1 tablespoon of the remaining olive oil and in it cook the pine nuts until they are a delicate brown.  Add them to the rice, then sir in the currants.

In a large pot, bring 2 quarts of water to a boil over high heat.  Drop in the grape leaves and immediately turn off the heat.  Let the leaves soak for 1 minute, then drain them in a sieve and plunge them into a bowl or pan of cold water to cool them quickly.  Gently separate the leaves and spread them, dull sides up, on paper towels to drain.

Layer the bottom of a heavy 2 to 3 quart casserole with about 10 of the leaves.  Stuff each of the remaining leaves with about 1 tablespoon of the rice mixture.  Stack the stuffed leaves, side by side and seam sides down, in layers in the casserole and sprinkle them with the remaining 2 tablespoons of oil and the cold water.  Place the casserole over high heat for 3 minutes, reduce the heat to low and simmer, tightly covered, for 50 minutes.  Then uncover and cool to room termperature.

To serve, arrange the stuffed grape leaves attractively on a platter or individual plates and garnish with lemon wedges.
Posted by Sarah at 4:00 AM