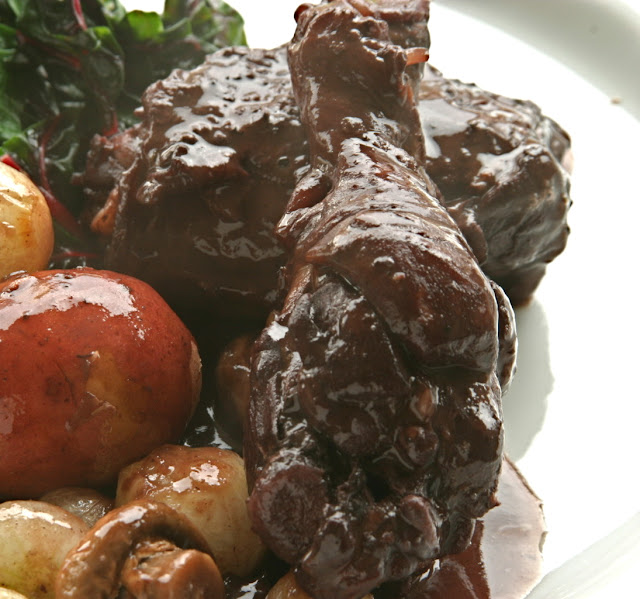 A few weeks ago my good friend, Val, gave me Julia Child's cookbook, Mastering the Art of French Cooking.  I promised to make a recipe from it and I am finally doing that.  This is a traditional French Coq au Vin.  I have not made this in years.

Although the traditional recipe uses red wine, I had my trepidations.  It was so painful looking in the pot!  Beautiful farm chicken stained red?  But I did it and the result was well worth the initial fears.  The final product was similar to Chinese lacquered duck.

The process was a little more detailed than other chicken stews.  But again, worth the effort.

Boiling the bacon lardons in water before sauteeing removed a lot of their fat and therefore, the flavour did not dominate over the chicken.  I bought pancetta already cut and it was perfect.  It added a nice subtlety.  Then lightly browning them in butter made them very palatable in the dish.

After simmering the chicken in wine and broth, and removing it to another plate, it was time to degrease the liquid.  I have always degreased by cooling the liquid.  Julia's method requires that it is brought to a simmer.  Actually this works, too.  The fat tends to come together around the edges and, even though I removed some cooking liquid, I was able to remove most of the grease.  Also, as the cooking liquid reduced, I did skim off any scum that formed.

I substituted the cognac with calvados ( Grace - just one more time to use up all your calvados! ).  It flamed nicely and burned off the alcohol. 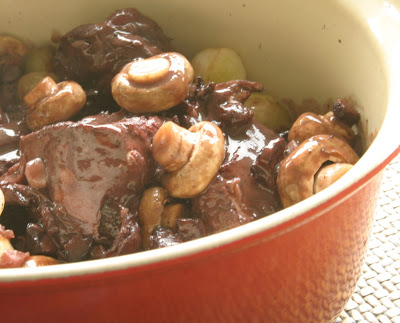 I like the serving suggestion, that it can be prepared to a point that it can wait 'indefinitely' before presenting.  I think this makes for a wonderful casual dinner party dish.

Traditionally, it would be served with baby potatoes or mashed potatoes and root vegetables or green beans.  I think it would also be amazing with polenta.

This is more of a commentary than sharing a recipe.  You know how detailed Julia's recipes are!  And you all know how to find it!  Adapting it to a simpler version so I can publish it on my blog would be blasphemy.  So I leave you with these notes to follow when you try this.