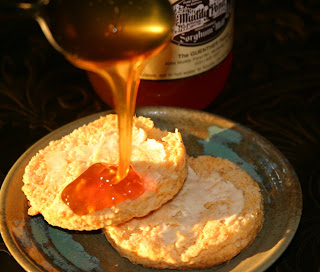 I am the world’s worst biscuit maker.  I have been making them since grade nine and I have a degree in home ec.  You would think I could make a simple biscuit.
But the big epiphany today was discovering sorghum!  Okay, it was at Dollywood, but sorghum is sorghum, regardless.  It is the most delicious sweet I have ever tasted, outside maple syrup of course (I'm Canadian, after all).  But back to the biscuits...
The only reason I made biscuits is because I have joined the Tuesday’s with Dorie  baking blog.  Each Tuesday we bake a recipe made from Dorie Greenspan’s cookbook “Baking – From My Table to Yours”.
I made two attempts at this recipe.  My first try was totally dismal in many ways.  I have a habit of rolling biscuits too thinly.  The recipe wasn’t specific in how much mashed sweet potato and I felt it was way too salty.  Since I made this recipe twice, I tried a sprinkle of cinnamon in one and nutmeg in the other.  Also, the recipe used canned sweet potato, which I wouldn’t use in a million years.  Who buys canned sweet potato?  So my suggestion is to cube and cook the sweet potato.  Then let it cool in the cooking liquid so it absorbs a bit of the water.  Don’t make the mashed product too dry.   Also, I agree with my friend Ron that lard does a much better job than butter in things that you want to be flaky.  If you substitute lard, I would reduce the amount slightly. 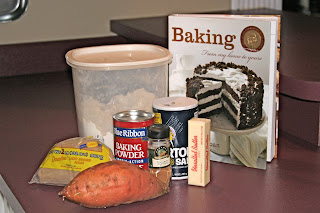 However, I don't believe this recipe can be flaky.  There is a whole cup of mashed sweet potato.  That interferes with the chemistry of flake making.  Instead, they are tender and dense.  As I mentioned, they were delicious served with sorghum .
Tips for Biscuit Making
*  do not overwork
*  the fat must be very cold.  Even refrigerate after incorporating the fat so it can harden before rolling.

*  the dough is better to be too wet than too dry
*  use a sharp cookie cutter and do not twist as you cut
*  try not to incorporate too much flour when rolling out.  Use a rolling cloth and rolling pin cover, if necessary.
*  ok to freeze after rolling, cutting and before baking.  Just defrost on the sheet before baking.


Preheat oven to 425F and put rack in centre of oven.


Mix dry ingredients in a bowl.  Add the brown sugar and stir to incorporate and be sure there are no lumps.  Cut in the butter until the texture of coarse oatmeal and some pieces of the size of small peas.


Add the sweet potatoes and toss gently with a fork until you have a nice soft dough.  Turn onto the countertop and gently knead 3 or 4 times until it all comes together.


Bake 14 to 18 minutes.  They taste best if left to completely cool before serving.
Posted by Sarah at 5:50 AM

Email ThisBlogThis!Share to TwitterShare to FacebookShare to Pinterest
Labels: Breads and Quick Breads