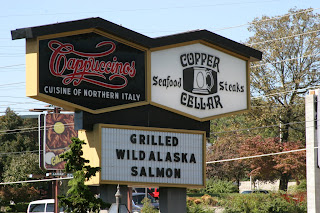 I finally ate out in Knoxville today.  I drove up and down Kingston Pike looking for a non-chain interesting place to eat.  It wasn't easy!  The Pike is a super-sized Macleod Trail.  I finally stopped at the Copper Cellar and Cappuccinos.  There was only one entrance so I have no idea where Cappuccinos was located.

The Copper Cellar was your typical Caesar's Steakhouse style of eatery.  There was not one window in the entire room, hence the Cellar.  It was very busy so I was very encouraged that the food would be good.

I didn't take my camera in to the restaurant so I don't have pics of my meal but I had the Ground Sirloin Steak au Poivre on Bleu Cheese Grits with one side of my choice.  Sides are a big thing down here.  There are usually at least five or six options.  I chose the Spinach Maria au Gratin.  It was great!  I cannot remember the last time I had a ground sirloin steak.  Bleu cheese also seems to be a big thing down here.  I have no idea why.  The grits were creamy and very tasty with the added bleu cheese.  It was like having mashed potatoes with the steak. 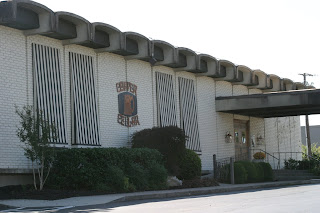 Now, this is not very appetizing, but I just saw a program on television about a woman in Michigan who is paralyzed from the waist down due to an ecoli infection from ground meat.  The program was also very educational.  Apparently when you buy ground meat in the U.S. the meat actually comes from Uruguay or a dozen other places and they could all end up in the same batch.  The only way you are truly safe to eat ground meat is if it is from one source and preferably local fresh beef.  This restaurant actually grinds their own meat daily.  So I felt confident.  Not only do they grind their meat daily but they bring in fresh fish and seafood from three shores daily - Atlantic, Pacific and Gulf of Mexico.  They do not fillet the fish until it is served to preserve freshness.  Now they have my attention.

It was a great little spot.  The food was great.  They had an interesting feature on their tab with a 'quick tip guide'.  They automatically calculate 15%, 18%, 20% and 25%.  I haven't seen that before.  Good marketing.