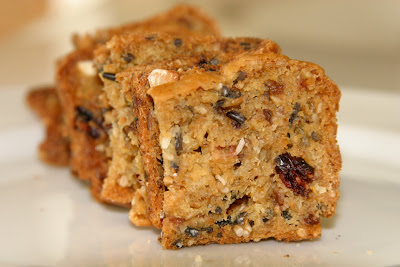 I have been intrigued with making crackers for quite some time.  I came across a recipe for a "Lesley Stowe" style of cracker that I found at Dinner with Julie and thought I would try it.  It is very close to the recipe for an American Irish Soda Bread.  And then it is double baked like a biscotti.  You can vary the nuts, herbs, dried fruits to suit your taste.

I would suggest trying dried cranberries or cherries, thyme, caraway seeds, crushed cardamom seeds or what ever your mind can conceive.  Also, this recipe uses 2 regular size loaf pans but next time, I would use the mini loaf pans (and vary the first baking time accordingly) to produce a smaller cracker.  I was also quite happy with the result when I cut the slices in half before the second baking. 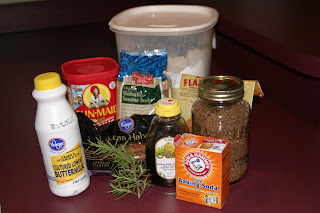 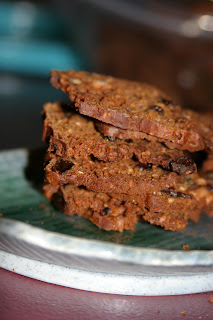 The cooler the bread, the easier it is to slice really thin.   Slice the loaves as thin as you can and place the slices in a single layer on an ungreased cookie sheet.  You can slice them so thin as to be almost lacy.  These loaves freeze well so could be sliced and baked another day, if desired.   Reduce the oven heat to 300° F and bake them for about 15 minutes, then flip them over and bake for another 10 minutes, until crisp and deep golden.
Makes about 8 dozen crackers.
Posted by Sarah at 5:22 PM