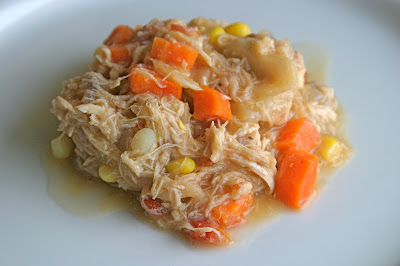 I drove through Georgia en route to my cooking class in Orlando last October.  The drive through Atlanta was grueling, to say the least.  It was raining buckets and the traffic was going 70mph on all 6 lanes.  A tad stressful.

I was so glad to have that part of the trip behind me.  I spent that night in Macon, Georgia.  THE place to eat in Macon is H&H Cafeteria.  Even Oprah has eaten there.  But it is not open in the evening, drat.  So I went looking for another spot to eat.
I ended up in a mall at a little fantastic barbecue place.  One of the sides included with my meal was Brunswick Stew.  I had never heard of it until then.  It was so good!  I ate the entire cupful.  When I returned to my hotel, I asked the staff what was in the stew.  No one knew for sure, but they thought some nasty cuts of the animal were in it.  The original stew used squirrel.  Well, needless to say I didn’t eat it again.
So here we are with the April challenge with The Daring Cooks – Brunswick Stew!  This may look complicated but I had most items on hand, either in the freezer or cold room.  And best of all, I learned that this stew is just chicken or chicken and rabbit.

I eventually used two heavy bottomed pots to cook the stew and then poured it all into a large stockpot to mix the whole amount together.  It makes a lot!  It could easily serve 14-16 people, so make it when the family comes over.  I served it to a group of 8 and they ate the whole thing!  I am still in awe of their healthy appetites!  I guess that tells you it was 'good'!

I served it with cornbread and you can find the recipe here.  My group ate so much, so fast that I really don't have any good pictures!  You will just have to take my word...it was fantastic.

I didn't try freezing it, but I think it would be better fresh.


The 2010 April Daring Cooks challenge was hosted by Wolf of Wolf’s Den.  She chose to challenge Daring Cooks to make Brunswick Stew.  Wolf chose recipes for her challenge from The Lee Bros. Southern Cookbook by Matt Lee and Ted Lee, and from the Callaway, Virginia Ruritan Club.
Brunswick Stew has a long, and oft debated history. Brunswick, Georgia claimed that the first Brunswick Stew was created there in 1898. There is, at the Golden Isles Welcome Center on Interstate 95, a bronzed stew pot with a plaque proclaiming this fact.
However, Brunswick, Virginia claims that the first Brunswick Stew was created there by a camp cook named Jimmy Matthews in 1828, for a hunting expedition led by Dr. Creed Haskings, a member of the Virginia State Legislature for a number of years. He was said to have used squirrel in the original Brunswick Stew created for the group when they returned. The hunters were at first skeptical of the thick, hearty concoction, but upon tasting it, were convinced and asked for more.
Every October in Georgia, there is an Annual Brunswick Stew Cookoff that pits ‘Stewmasters’ from both Virgina and Georgia against each other. 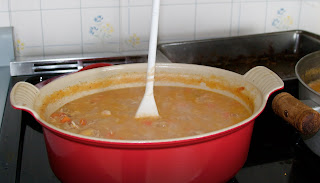 In the early 20th century, the rivalry of the two Brunswicks helped make this dish as popular as it is today, and it quickly became a Southern classic.
Most agree that Brunswick stew is not done properly “until the paddle stands up in the middle.”
Brunswick Stew                    from “The Lee Bros. Southern Cookbook: Stories and Recipes for Southerners and Would-Be Southerners” by Matt Lee and Ted Lee
Serves about 12
1/4 lb slab bacon, rough diced
2 Serrano, Thai or other dried red chiles, stems trimmed, sliced, seeded, flattened
1lb rabbit, quartered, skinned
1 4-5lb chicken, quartered, skinned, and most of the fat removed
1 Tablespoon sea salt for seasoning, plus extra to taste
8-12 cups chicken broth
2 bay leaves
2 large celery stalks, left whole or cut to fit the pot
2lbs Yukon Gold potatoes, or other waxy type potatoes, peeled, rough diced
1 ½ cups carrots (about 5 small carrots), chopped
3 ½ cups onion (about 4 medium onions) chopped
2 cups fresh corn kernels, cut from the cob (about 4 ears)
3 cups butterbeans, preferably fresh (1 ¼ lbs) or defrosted frozen
1 35oz can whole, peeled tomatoes, drained
¼ cup red wine vinegar
Juice of 2 lemons
Tabasco sauce to taste
In the largest heavy bottomed pot you have, preferably a 10-12 qt or even a Dutch Oven if you’re lucky enough to have one, fry the bacon over medium-high heat until it just starts to crisp. Transfer to a large bowl, and set aside. Reserve most of the bacon fat in your pan, and with the pan on the burner, add in the chiles. Toast the chiles until they just start to smell good, or make your nose tingle, about a minute tops. Remove to bowl with the bacon.
Season liberally both sides of the rabbit and chicken pieces with sea salt and pepper. Place the rabbit pieces in the pot and sear all sides possible. You just want to brown them, not cook them completely. Remove to bowl with bacon and chiles, add more bacon fat if needed, or olive oil, or other oil of your choice, then add in chicken pieces, again, browning all sides nicely. Remember not to crowd your pieces, especially if you have a narrow bottomed pot. Put the chicken in the bowl with the bacon, chiles and rabbit. Set it aside.
Add 2 cups of your chicken broth or stock, if you prefer, to the pan and basically deglaze the pan, making sure to get all the goodness cooked onto the bottom. The stock will become a nice rich dark color and start smelling good. Bring it up to a boil and let it boil away until reduced by at least half. Add your remaining stock, the bay leaves, celery, potatoes, chicken, rabbit, bacon, chiles and any liquid that may have gathered at the bottom of the bowl they were resting in. Bring the pot back up to a low boil/high simmer, over medium/high heat. Reduce heat to low and cover, remember to stir every 15 minutes, give or take, to thoroughly meld the flavors. Simmer, on low, for approximately 1 ½ hours. Taste the stock, according to the recipe, it “should taste like the best chicken soup you’ve ever had”. 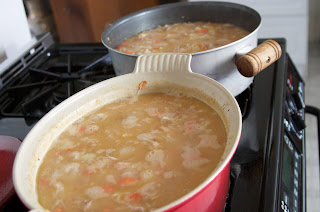 With a pair of tongs, remove the chicken and rabbit pieces to a colander over the bowl you used earlier. Be careful, as by this time, the meats will be very tender and may start falling apart. Remove the bay leaf, celery, chiles, bacon and discard.

After you’ve allowed the meat to cool enough to handle, carefully remove all the meat from the bones, shredding it as you go. Return the meat to the pot, throwing away the bones. Add in your carrots, and stir gently, allowing it to come back to a slow simmer. Simmer gently, uncovered, for at least 25 minutes, or until the carrots have started to soften.
Add in your onion, butterbeans, corn and tomatoes. As you add the tomatoes, crush them. Simmer for another 30 minutes, stirring every so often until the stew has reduced slightly, and onions, corn and butterbeans are tender. Remove from heat and add in vinegar, lemon juice, stir to blend in well. Season to taste with sea salt, pepper, and Tabasco sauce if desired.
You can either serve immediately or refrigerate for 24 hours, which makes the flavors meld more and makes the overall stew even better. Serve hot, either on its own, or with a side of corn bread, over steamed white rice, with any braised greens as a side.
Sunday Chicken Broth
From “The Lee Bros. Southern Cookbook: Stories and Recipes for Southerners and Would-Be Southerners” by Matt Lee and Ted Lee
Makes about 1 quart (4 cups or 919.68 grams or 32.303 oz)
Estimated Time- 1 ¼ hours
Bones and trimmings, but not giblets, of one 3 ½- 4 ½ chicken, or  approx. 2 cups chicken bones and trimmings
1 large onion, trimmed, peeled, quartered
6 large stems fresh flat leaf parsley
1 stalk celery, cut into 2” lengths
2 large bay leaves
5 cups cold water
1 cup crisp dry white wine
Salt and pepper to taste
Place bones/trimmings in medium stockpot and add onion, parsley, celery and bay leaves. Add wine and water, liquid should cover all ingredients, if not, add more until it does. Bring to vigorous simmer over high heat, then reduce heat and simmer gently for roughly 45 minutes to an hour, skimming any scum or fat that comes to the surface.
Strain broth into bowl through fine mesh strainer. Discard the solids. Measure what you are left with, if not planning to further reduce, then salt and pepper to taste.
Store in tightly sealed container in refrigerator until the remaining fat congeals on the top. Remove the fat, and unless not using within 2 days, keep tightly sealed in the refrigerator. Otherwise, freeze, and it will keep for upwards of a month.
Posted by Sarah at 6:00 AM