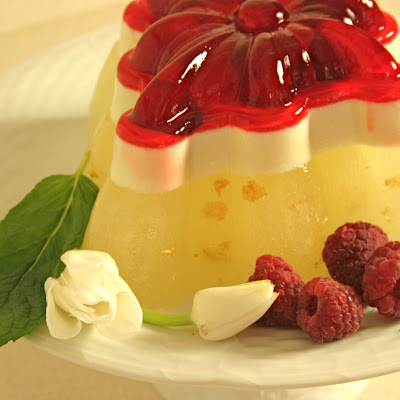 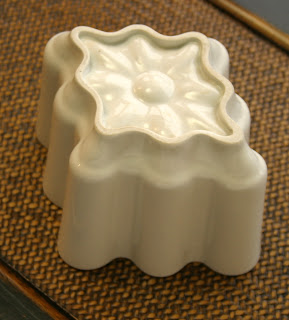 I have had this Shelley's of England mold for over 20 years and I have never used it.  I bought it at an auction because I thought it was quaint.  Research tells me that  these ironstone molds were produced between 1912-1925, hence the somewhat Art Deco patterns.  They say it can also be used as a steamed pudding mold.

Finding a modern and interesting jellied salad that you would actually want to eat can be a challenge.  Most recipes call for packaged jelly products.  Victorian congealed salads were very complicated and ornate.  But this isn't a Victorian era mold.  However, the shape does suggest a layered salad to some degree.

Removing jellies and creams from moulds can be difficult, especially those with a great deal of detail. Ceramic moulds in particular can be very awkward. From the eighteenth century onwards, professional cooks brushed the inside of the mould with a little 'sweet oil' (almond oil), turning the mould upside down on a plate to allow the excess to drain away. 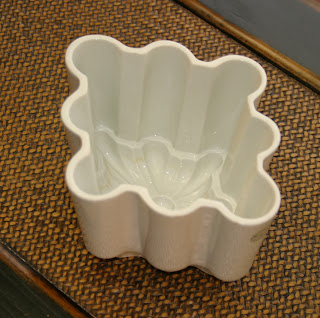 They also embedded the moulds in bowls of crushed ice to speed up setting. By leaving the moulds in the ice for a few minutes before pouring in the jelly, the almond oil congealed on the inner surface of the mould preventing it from floating to the top of the liquid jelly. When the jelly was completely set, the mould was dipped in hot water - just a few seconds for copper and tin, up to thirty seconds or more for ceramic moulds. The wet mould was then wiped dry and a plate put on top.
The mould was then inverted and lifted and if everything went well, the jelly came out. This was very straightforward with copper moulds, but sometimes a finger had to be gently inserted between jelly and mould to allow the air to dispel the vacuum. Some skilled cooks demoulded the jelly directly on to their hand, rapidly conveying it to the centre of the dish. The dish was usually wetted with a little water to enable the jelly to be slid gently into the middle. 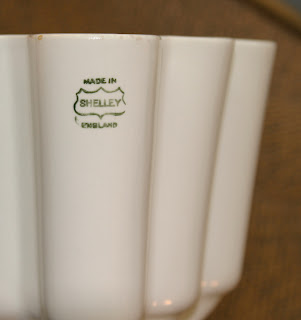 Jelly moulds were actually used for a variety of purposes. As well as being used for making jellies, creams, bavaroises and other cold puddings, they were utilized for steaming puddings, baking cakes and also for poaching both savoury and sweet dishes. Some were used for making ices, but these normally were equipped with a tight fitting lid and a screw to allow for easy demoulding.
Savoury jellies were just as popular as sweet jellies and the high-class cookery books of the nineteenth century are full of artistic dishes based on aspic, like Agnes Marshall's balletes de foie gras à la Imperiale and the swans à la luxette. These dishes were very time consuming and testify to an age when middle and upper-class kitchens were often generously staffed and well-equipped with specialist moulds. Though they are visually delightful, the excessive use of gelatine and purees in this dishes makes them unattractive to most modern palettes.
Mrs Marshall's recipes were aimed at young housewives married to professional men, who though probably well-off, could not afford the extensive kitchen staff found in the great houses.
Gelatine-based dishes had a great attraction, as they could be prepared the day before a dinner party, freeing up time on the day itself for cooking the other items of the meal. Her two cookery books are full of recipes which require moulds, which the enterprising lady offered for sale at her premises in Mortimer St.    (from www.historicfood.com)    1912-1925 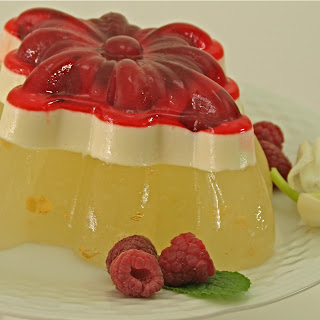 This salad is made in three layers.  The base is a champagne jelly, then a layer of a creamy gelatin.  Picture this in your mind as the 'salad dressing'.  The top layer is the raspberry gelatin with fresh raspberries.

Of course, when you are making a molded salad, you begin with the top layer in the mold. 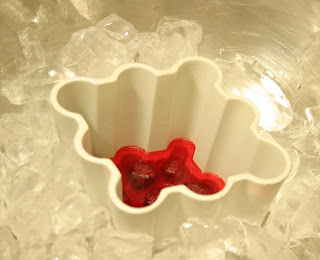 Place the raspberry jelly powder in a bowl and add boiling water.  Stir to mix.  Refrigerate until thoroughly chilled.  This will take about 45 minutes.  Meanwhile, brush the inside of the mold with almond oil (or canola oil if you have no almond oil).  Invert the mold on a baking sheet so the excess oil can drip out.

When the jelly has thoroughly chilled and begun to slightly set, place fresh berries in the bottom of the mold.  Carefully place the mold in a dish of ice cubes.  This will make the oil solidify slightly so that it doesn't simply rise to the top when you add the chilled jelly.  Add jelly to the desired level.  Allow to thoroughly set.  The time will vary depending on the size of your mold and the amount of jelly you are using in this layer.  Estimate about 30 minutes.  Reserve the leftover raspberries for garnishing the finished salad.

There is no need to completely cover the raspberries.  They will just be embedded in the following layer.

Because I let mine set up in the pan of ice and this first layer was quite thin, I knew it wouldn't take long.  I began the creamy layer immediately and the timing worked out well.

Stir together half-and-half and 1/4 cup cold water in a medium sauce-pan. Sprinkle with 2 teaspoons unflavored gelatin (blooming the gelatin), and stir. Place pan over medium heat; stir in 1/2 cup sugar, and cook, stirring often, 3 to 5 minutes or until sugar and gelatin dissolve. (Do not boil). Remove pan from heat.

Microwave cream cheese at MEDIUM (50% power) 45 seconds or until very soft; stir until smooth. Whisk cream cheese into half-and-half mixture until smooth.  Getting it smooth is important.  It may take a bit of whisking.  I also gently warmed the mixture a bit and continued whisking until there were no lumps.  This layer is slightly translucent so lumps may show.  Whisk in vanilla extract, and chill 30 minutes or until slightly cool. Spoon about 1 inch of this mixture over the firm raspberry layer in mold; chill until firmly set. Be sure that the fruit is now covered by the gelatin.  The next layer is translucent and you want a nice appearance. 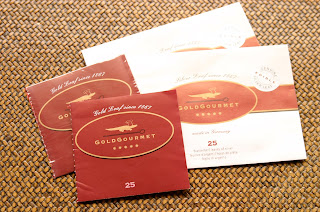 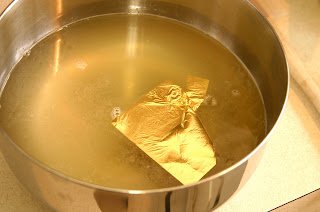 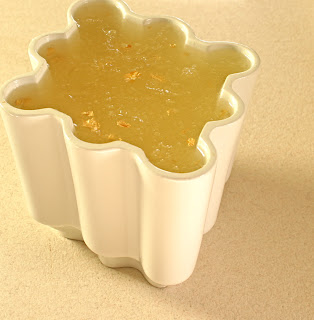 In a small bowl, soften the gelatin in 3 tablespoons of the water. In a saucepan, heat the remaining water over low heat and add the gelatin. Stir until the gelatin dissolves and add the sugar, lemon zest, and juice. Heat to just below the boil and remove from the heat. Cover and let steep for 20 minutes. Strain the liquid through a fine sieve into a shallow metal bowl. Discard the lemon zest and leave the liquid to cool. Watch it carefully and, when it is quite cool and just about to set, stir in the champagne.  Also put a sheet of gold foil in champagne jelly at this time.  If you add the edible gold while the jelly is still hot, it will just melt and not hold its shape.  When jelly is almost set, whip it up and break the gold into pieces.  Then pour into mold for last layer. Cover and chill at least 2 hours or up to 24 hours.

Don't cover bowls or glasses during each chill time (except at very end). This shortens the required time in the refrigerator as you move through the steps.

Be sure your work surface is level as you set the layers.

Definition of "Blooming" gelatin:
As the gelatin absorbs the liquid, each granule becomes enlarged; this is known as "blooming."  Blooming gelatin is a step integral to ensuring the smooth texture of a finished product. It involves sprinkling the powdered gelatin into a liquid and letting it sit for 3 to 5 minutes. Then, when the mixture is heated, the gelatin will dissolve evenly.

If any gelatin mixture sets too quickly and you can't pour it, then gently reheat to bring back to the consistency you want.  It will reset.

Any bubbly wine would work if you don't want to use champagne.  Don't use an expensive champagne.  I used prosecco.  Even a bubbly non-alcoholic would be fine.

Golda's Kitchen in Canada sells edible gold flakes.  I think I bought my sheets of gold through the U.S. and it was a fortune just to get it into Canada.  Chocolat-Chocolat in Montreal has edible gold and silver sheets.  Even though still expensive, better to buy this in your own country no matter where you live.

Enjoy the rest of the bottle of champagne while you make this!  It makes the time go by so much more pleasantly! 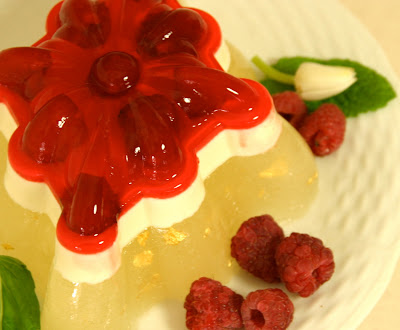