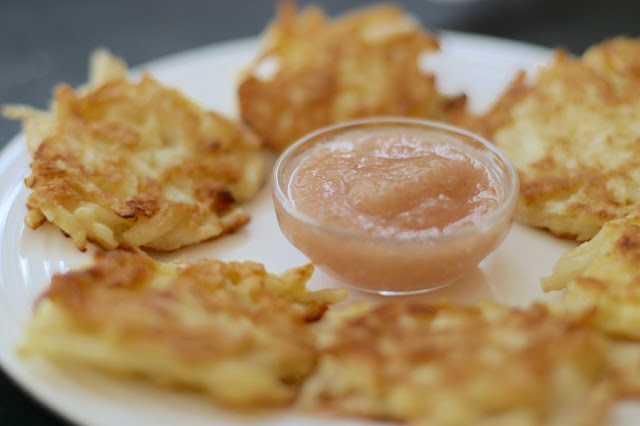 Today is the last day of Hanukkah and as feasts unfold in homes across the continent one dish is sure to be served. But it isn't the potato that is significant, it is the oil. When the Jerusalem Temple was recaptured and reconsecrated there was only enough oil to last for a day. Miraculously the oil burned and provided light for eight nights.  That was enough time to make more oil.

Potato latkes are best served right out of the pan and onto the plate. Potatoes are traditional but latkes are also made with sweet potatoes. Serve with applesauce and sour cream. Small latkes are perfect for serving with creme fraiche and caviar. 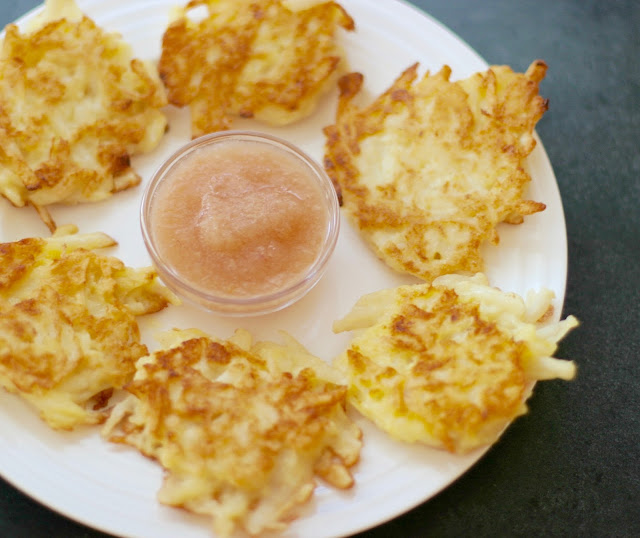 Preheat oven to 250 F with rack in upper third.

Peel potatoes and coarsely grate into a bowl using large teardrop-shaped holes of a box grater or in a food processor fitted with medium shredding disk. Add lemon juice and toss to coat.

Coarsely grate onion into same bowl. Transfer to a kitchen towel (not terry cloth), then gather up corners to form a sack and twist tightly to wring out as much liquid as possible.

Wipe bowl clean, then return potatoes and onion to bowl and stir in flour, eggs, and 1 1/4 teaspoons salt until just combined.

Heat oil in a 12-inch nonstick skillet or cast iron pan over medium-high heat until hot but not smoking. Fill a 1/4-cup measure halfway with latke mixture and carefully spoon it into skillet, then flatten to 3 inches in diameter with a slotted spatula.

Form 5 more latkes in skillet and fry until undersides are deep golden, 1 1/2 to 3 minutes. If latkes brown too quickly, reduce heat to medium. Turn over and fry until deep golden on the other side, 1 1/2 to 3 minutes more. Transfer to paper towels to drain briefly, then transfer to a metal rack set in a baking pan and keep warm in oven. Make more latkes.