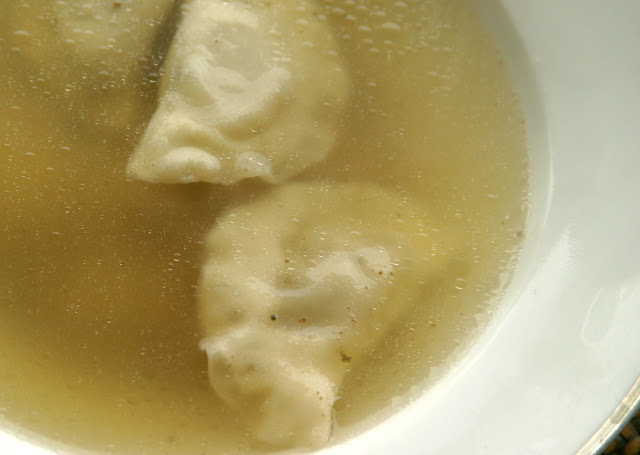 I made perogies for The Daring Cooks challenge a while ago and, although the perogies were wonderful, the dough was rolled to thinly for keeping well in the freezer.  They would break up when boiling and I discarded a lot of nice food.

Then I had a bright idea!  How about using them in soup.  If they burst and spilled their contents, it would just add to the flavour of the soup.

I used my homemade duck broth from this post.  And my perogies from this post.   When I made one of my batches of perogies, I added a dollop of black truffle sauce to the mashed potatoes.  The result was divine.  The truffle flavour actually came out nicer in the soup than they did when I served the perogies in the traditional style with sour cream.

I brought the broth to a boil.  Salted to taste.  Plopped in the perogies and continue to gently simmer until they were done.  There is a nice glisten of duck fat on the surface and the flavour was amazing.
Posted by Sarah at 3:54 PM

Email ThisBlogThis!Share to TwitterShare to FacebookShare to Pinterest
Labels: dinner for one, duck, soups