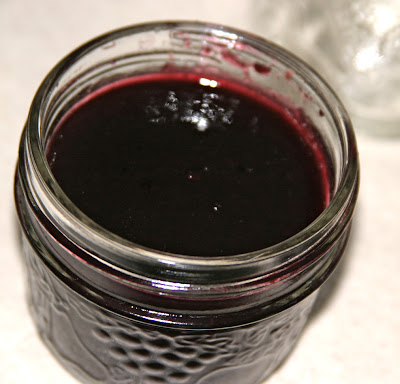 It is that time of the year again!  I have been doing a lot of canning and will be sharing more recipes.  Today it was Concord Grape Jam.  I could have made beautiful clear jelly but I wanted a change.  This was a little fussy to make.  First, peeling grapes!  I eventually just squeezed and the innards popped out.  It was still a tad tedious though.

But the results are wonderful.  The jam has somewhat of a floral flavour and aroma that you do not achieve when making the jelly.  I will be looking for some ideas on serving this.  Do you have any? 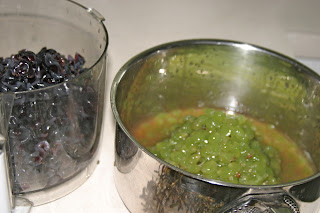 Wash jars, lids, and screw bands in hot, soapy water, then rinse well. Dry screw bands. Put jars on a rack in canner or deep pot and add enough water to cover by 2 inches. Bring to a boil, covered, then boil for 10 minutes. Remove from heat, leaving jars in water. Heat lids in water to cover by 2 inches in a small saucepan until thermometer registers 180°F (do not let boil). Remove from heat, leaving lids in water. Keep the jars and lids submerged in hot water, covered, until ready to use.
Cook jam:
Chill 2 small plates (for testing jam).
Slip skins from grapes and purée skins with 1 cup sugar in a food processor, then transfer to a 4- to 6-quart wide heavy pot. Stir in lemon juice, peeled grapes, and remaining 4 cups sugar and boil over moderate heat, stirring frequently and skimming foam, until pulp is broken down, about 20 minutes. Force jam through food mill set over a large bowl. Discard remaining solids. Return jam to pot and cook at a slow boil, skimming foam occasionally and stirring frequently as mixture thickens to prevent scorching, 35 minutes, then test for doneness.
To test jam, remove from heat, then drop a teaspoonful on a chilled plate and chill 1 minute. Tilt plate: Jam should remain in a mound and not run. If jam runs, continue cooking at a slow boil, testing every 5 minutes, until done, up to 25 minutes more.
Seal, process, and store jars:
Drain jars upside down on a clean kitchen towel 1 minute, then invert. Ladle jam into jars, leaving 1/4 inch of space at top. Wipe off rims of filled jars with a clean damp kitchen towel, then top with lids and firmly screw on screw bands. Put sealed jars on rack in canner or pot and add enough water to cover by 2 inches. Bring to a boil, covered, then boil 10 minutes. With tongs, transfer jars to a towel-lined surface to cool.
Jars will seal; if you hear a ping, it signals that vacuum formed at the top of cooling preserves has made lid concave. Remember that you may or may not be around to hear that ping (some jars make the sound after you remove them from water, and others in same batch may take a few hours); the important thing is for jars to eventually have concave lids. Preserves will thicken as they cool.
After jars have cooled 12 to 24 hours, press center of each lid to check that it's concave, then remove screw band and try to lift off lid with your fingertips. If you can't, lid has a good seal. Replace screw band. Put any jars that haven't sealed properly in the refrigerator and use them first.