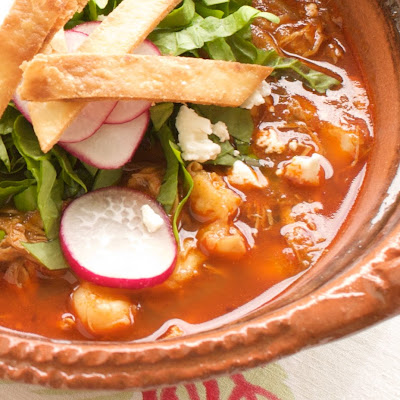 The only time I have eaten posole was when I was in New Mexico visiting the beautiful Acoma Pueblo.  It was served at the visitors' centre restaurant.  When I was in Tennessee, I found a little Mexican store.  They were selling the dried corn used to make this soup.  I had to buy it.  I also bought this rustic bowl at that same store. 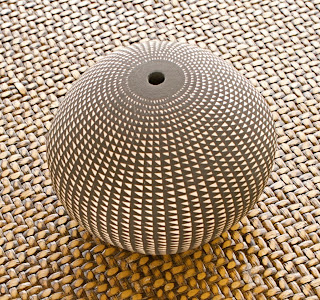 The squeezed lime juice added at the time of eating is essential to bringing out the best flavours of the dish.  If you don't like the idea of using pig's trotters, then just use pork shoulder.  It would be just fine.  I used a chiffonade of spinach, since it is in my garden.  I like the addition of garnishes on top.

I bought this lovely piece of handmade pottery at the pueblo.  It is a seed pot.  The pot would be filled with seeds and then you could shake them into the furrow to plant them.  It fits in the palm of your hand.


Posole
Tie together mint and cilantro with kitchen string.
Bring pork and water to a boil in a large pot, skimming froth, then reduce heat to a simmer. Add tied herbs, 20 garlic cloves, quartered onion, oregano, peppercorns, and 2 teaspoons salt and gently simmer, uncovered, until pork is very tender, about 3 hours. Strain broth through a large sieve into a large heatproof bowl. Return broth to pot. Discard mint and cilantro.  Pick through the meat and onions and discard bones and coarsely shred pork into broth.  Also rub the onions and garlic between your fingers to make a puree and add back to broth. 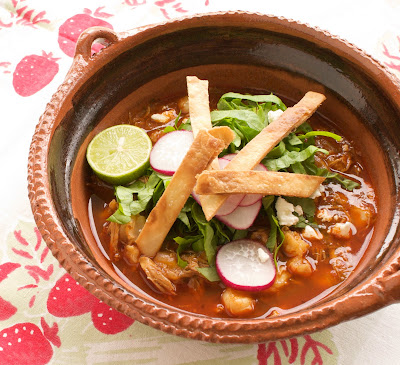 Meanwhile, slit chiles lengthwise, then stem and seed. Heat a large cast-iron skillet over medium heat until hot, then toast chiles in batches, opened flat, turning and pressing with tongs, until more pliable and slightly changed in color, about 30 seconds per batch. Transfer to a bowl and pour 2 1/2 cups boiling water over chiles. Soak, covered, until softened, about 30 minutes.


Heat oil in cast-iron skillet over medium heat until it shimmers, then add chile paste (it will spatter) and cook, stirring occasionally, until slightly thickened, 5 minutes.


Add chile paste and hominy back to the broth and simmer 5 minutes. Season with salt.  Slice suggested accompaniments and serve the stew with these.  Add them to your individual bowls of stew as desired.


Cooks' note: Posole can be made 3 days ahead. Chill, uncovered, to cool, then cover.
Posted by Sarah at 7:42 PM