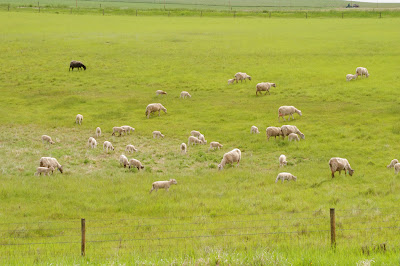 It was a dull rainy day and I was tired of working in my house.  I decided to go for a drive.  There is an interesting art gallery a couple of hours away and that was my planned destination.  Thank heaven I did this little jaunt before all the flooding this week!  The river is now swollen and Maple Creek has been declared in a state of emergency.

The first thing I found was my little lamb!  I have ordered a lamb from a farmer in Success.  As I am approaching the village, I saw a farm on the right with a herd of bleating sheep replete with sheep dog.  (That black sheep is not the sheep dog!  Puppy had something in his mouth and was taking it back to the farmhouse.)  They are so cute.  I am sure that one of these has my name on it. 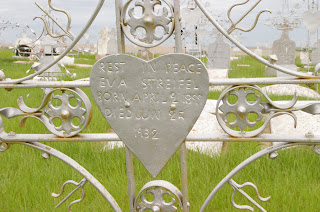 After driving through the most horrendous road construction (picture no flag people and huge machinery and big clods of soil and no indication which side of the road I was to be on) I came upon this absolutely charming cemetery.

The older graves had these hand made wrought iron crosses on them.  They were so creatively made with whatever was at hand and a simple heart bearing the information on the interred. 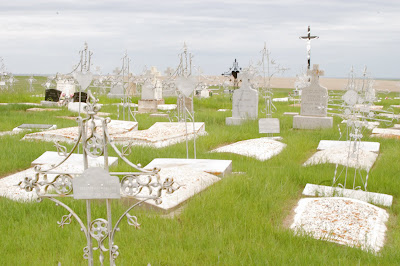 I had lunch in a small town called Leader.  From there I travelled west on a gravel road for about 10 km and turned north toward a settlement called Estuary.  Estuary is actually a spot on the map.  There is a large Hutterite colony and there is a tiny ferry to take cars across the South Saskatchewan River. 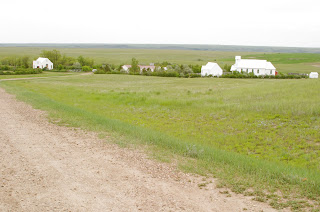 The river has a strong current and I am always stressed to go on the water especially my car on a little 2-car ferry.  It only lasted for a couple of minutes!  The country side was spectacular, as was the variety of birds.  My short wait for the ferry allowed me to enjoy such a variety of song birds.  After a short drive through ravines and past farms, I found the gallery, Sagebrush Studio.  Alas, it was closed.  It opens in June for the summer season and is advertised as 'open by chance or appointment'.  I took a chance!

They have also developed a beautiful garden along with the three churches they have brought in to stage their gallery. 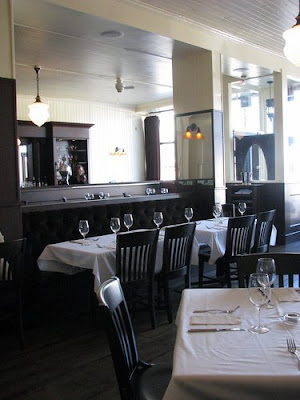 My day ended in Maple Creek with a little bit of shopping and a dinner of mussels at The Star.  It is rather upscale for a little ranching town. 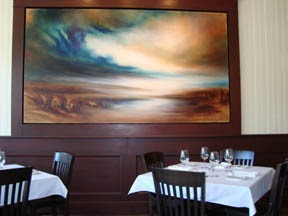 A centrepiece of the decor is this painting.  It is huge.  If you really look at the bottom left side, you can see buffalo in the swirls of colour.  This is an original by Barry Weiss who has his studio above the restaurant.
Posted by Sarah at 8:00 AM