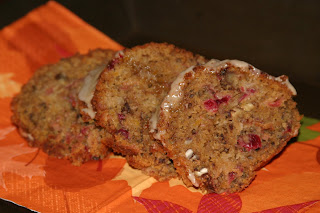 This week's Tuesday's With Dorie recipe is a Bundt cake.  The recipe was chosen by Britin of The Nitty Britty.   I have never ever made a Bundt cake!

The pan cost me $32.  That was the costliest part of this project.  I purchased a traditional pan so I would be able to use it all year round.  As opposed to those fancy shapes that would be limiting. 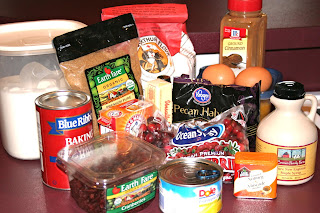 The recipe All-In-One Holiday Bundt Cake is a rather uninspiring name for a very tasty dessert. Nutmeg, ginger, pumpkin, apple, cranberries, pecans are the dominating flavours.   Rather than using canned pumpkin puree, I roasted a pie pumpkin and purreed it.  They are in season, after all.  It will also add more flavour.  This could be served for Thanksgiving or Christmas.

But I don't know if it is me, or my pan or the recipe but I made the cake twice and both times it did not release from the pan.  The first time, I made it with finely chopped pineapple and added dried cranberries.  It was delicious but I couldn't taste the dried cranberries.  The fresh ones were like bursts of beautiful tartness.  With the second cake, I used the finely chopped apple, as in the recipe.  I buttered and floured the pan both times.  So now I have two broken cakes that I cannot serve to guests!  I would say that the recipe is wrong in suggesting to only cool for 10 - 15 minutes before removing from the pan.  I would leave it to completely cool in the pan before removing.


Working with a stand mixer, preferably fitted with a paddle attachment, or with a had mixer and a large bowl, beat the butter and both sugars together at medium speed until light and fluffy.  Add the eggs one at a time, and beat for 1 minute after each addition.  Beat in the vanilla.  Reduce the mixer speed to low and add the pumpkin, chopped apple and grated ginger, if using it.  Don't worry if the mixture looks curdled.  Still on low speed, add dry ingredients, mixing only until they are incorporated.  With a rubber spatula, stir in the cranberries, dried cranberries and pecans.  Scrape the batter into the pan and smooth the top with the rubber spatula. 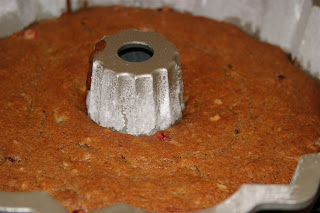 Bake for 60 to 70 minutes, or until a thin knife inserted into the centre of the cakes comes out clean.  Transfer the cake to a rack and cool for 10 minutes before unmolding, then cool to room temperature on the rack.


Just before bringing to the table, dust with confectioners' sugar or drizzle with maple syrup icing.


To 6 tablespoon of confectioners' sugar add 2 tablespoons of maple syrup.  Add more maple syrup, as necessary, to make an icing that runs nicely off the tip of a spoon.  Drizzle the icing over the cake.  Let sit for a few minutes to set before serving.


If wrapped well, this will keep at room temperature for 5 days.  It serves best the second day, after flavours have had a chance to mingle.  By the 5th day, it could be sliced thinly and toasted for breakfast. This can be frozen up to 2 months.  Try it toasted for breakfast smothered in butter and maple syrup or served fresh with whipped cream or ice cream.

Email ThisBlogThis!Share to TwitterShare to FacebookShare to Pinterest
Labels: cake