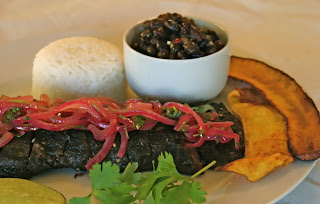 While I was in Orlando, I had a most fabulous meal at Padrino's.  It was a simple skirt steak with rice and beans but the Cubans have such a way with seasonings.  And the atmosphere was so much fun, too.  This is my take on a Cuban skirt steak.  Garnish with lime slices, cilantro and deep fried sweet plantain.

Skirt steak is rarely sold in Canada but it is much the same as a flank steak.  This is a less tender cut of beef but very flavourful.  Slow moist heat tenderizes it beautifully.  It is usually marinated, also.

The recipe for Moros & Cristianos is included although I served the rice and beans separately.  I don't like gray looking rice.  Moros & Cristianos is an old reference to the Moors and Spanairds, blacks and whites.  A sofrito is used with the black beans.  This can be made in a larger quantity and stored in the refrigerator to use over a couple of weeks.  Or I have also seen it in a jar in the grocery store here in the south. 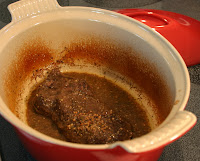 Remove steaks from marinade and pat dry with paper towels.  Sprinkle steaks on both sides with salt and pepper.  Pour oil into heavy large skillet; heat over high heat until oil is very hot.  Add steaks to skillet and cook until crisp outside, about 3 minutes per side.  Drain briefly on paper towels.  Arrange steaks on platter; spoon Red Onion Mojo over.  Garnish with lime slices and serve.

Heat oil in heavy large skillet over medium-high heat. Add onions and sauté until tender and translucent but not brown, about 10 minutes. (Can be prepared 2 hours ahead. Let stand at room temperature. Rewarm over medium heat before continuing.)

Add lime juice to onions and simmer until liquid is slightly reduced, about 3 minutes. Season to taste with salt and pepper. Remove onions from heat. Stir in cilantro leaves.