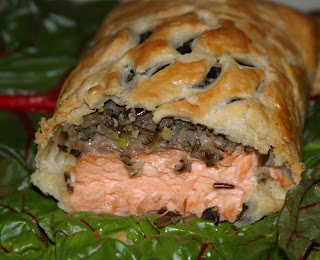 I have had fun making other 'en croute' applications in addition to the challenge, which is Salmon en Croute.  I have tried a pear en croute for a tapa and a sausage en croute, which we would call Pigs in Blankets.  Anything wrapped in a pastry is an 'en croute' method.  This would work equally well with Arctic Char or rainbow trout.

If you are cooking for one, as I am, then make a half recipe of the pastry.  This will give you plenty for 2 servings.  If your salmon was fresh when you bought it, then you can make up the extra serving and freeze, uncooked and wrapped in the pastry.  Defrost in the refrigerator for about 8-12 hours and then cook as directed.  This will make a lovely dinner when you know you will be working late.  Just remove it from the refrigerator before you go to work in the morning, or the night before. 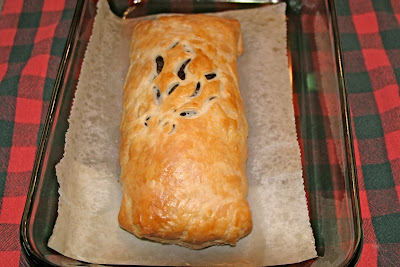 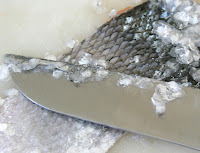 Also, when cooking for one, feel free to make substitutions.  I didn't want $4 worth of leeks just to make this recipe.  So I opted for the green onions I had at home.  I also used dried mixed wild mushrooms rather than buying fresh.  This not only gives less waste but it is more convenient.  In the sauce, I substituted the water I used to reconstitute the mushrooms rather than clam juice.  If you had fish stock in the freezer, you could use that rather than clam juice.  Clam juice is actually just an easy substitute for fish stock.

The salmon I bought had the skin on.  Not only was it skin on, but it also still had the scales.  These are some pictures as I removed the skin and removed the scales.  Check also for pin bones and pull out with tweezers.  I just bought a cheap pair of cosmetic tweezers but there are some specially made for fish.  The skin is a bonus because you can make salmon cracklings.  Cook in a little bit of olive oil or canola over medium heat until crispy.  Sprinkle with sea salt and use for a garnish or snack.

I had a little bit of extra pastry, so I rolled it out, placed a slice of prosciutto on it and then filled it with the rest of my wild rice.  I folded it into a package and baked with the salmon.  I could have put it in the freezer for another time, but I wanted to see if it tasted good.

Preheat oven to 400°F. Brush top of pastry with egg mixture. Bake until golden and thermometer inserted into fish registers 145°F, about 30 minutes.

If crème fraîche is unavailable, heat 1 cup whipping cream to lukewarm (85°F). Remove from heat and mix in 2 tablespoons buttermilk. Cover and let stand in warm draft-free area until slightly thickened (24 to 48 hours, depending on temperature of room). Refrigerate until ready to use.

To blend by hand:
In a bowl with your fingertips or a pastry blender blend together flour, butter, and salt until most of mixture resembles coarse meal with remainder in small (roughly pea-size) lumps. Stir in sour cream with a fork just until incorporated. Drizzle 4 tablespoons ice water over mixture and gently stir just until incorporated. Test mixture by gently squeezing a small handful: When it has proper texture it should hold together without crumbling apart. If necessary, add enough remaining water, 1 tablespoon at a time, stirring until incorporated and testing, to give mixture proper texture. (If you overwork mixture or add too much water, pastry will be tough.)

To blend in a food processor:
In a food processor pulse together flour, butter, and salt until most of mixture resembles coarse meal with remainder in small (roughly pea-size) lumps. Add sour cream and pulse just until incorporated. Drizzle 4 tablespoons water over mixture and pulse just until incorporated. Test mixture by gently squeezing a small handful: When it has proper texture it should hold together without crumbling apart. If necessary, add enough remaining water, 1 tablespoon at a time, pulsing until incorporated and testing, to give mixture proper texture. (If you overwork mixture or add too much water, pastry will be tough.)

To form dough after blending by either method:
Turn mixture out onto a work surface and divide into 4 portions. With heel of hand smear each portion once in a forward motion to help distribute fat. Gather dough together and form it, rotating it on work surface, into a disk. Chill dough, wrapped in plastic wrap, until firm, at least 1 hour, and up to 1 day.
Posted by Sarah at 3:59 PM