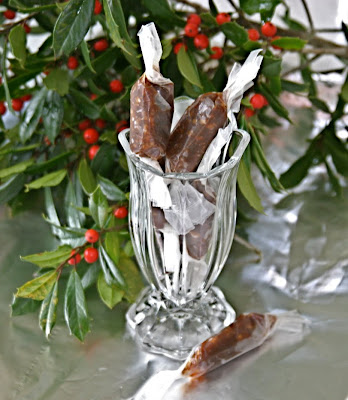 We had almost tornado strength winds (at least is seemed like that to me!) and driving rain the night before last.  The winds were still strong yesterday, as well.  I dragged all of the wrought iron patio furniture into the safety of the shop.  And my little Weber barbecue, too.  When I turned around the the wind was whipping the pool cover off.

There was nothing I could do.  But the story has a happy ending.  The winds died down last night.  This morning I surveyed the damage with the pool cover.  Turns out the cord holding it was still in one piece.  It had a ratchet type of thingy to keep it taut.  So I loosened it, pulled the pool cover back on and gradually cranked the ratchet to tighten it all up.  The winds may be back but it is just one day at a time, right?  Now back to cooking... 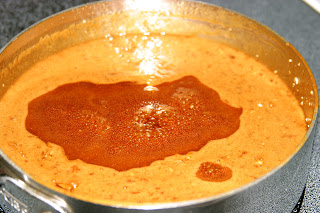 A byproduct from making your own candied orange peel and candied fruit is left over sugar syrup.  This syrup is flavoured with the fruits and it is very tasty.  I didn't want to waste it, so I experimented.  Because I used corn syrup in my process, the sugar syrup will not boil to the hard ball stage and make lollipops without burning first.  Corn syrup is great for preventing crystallization and makes a nice smooth sugar product.  Adding the corn syrup prolongs shelf life for the candied products.  Girl Gone Grits makes lollipops with her sugar syrup but she doesn't use corn syrup when making the candied orange peel and I thank her for planting the seed for me to use the orange flavoured syrup.

Options would be toffee, taffy and caramels.  Because I really didn't know the amount of sugar in my syrup, the traditional recipes were not that helpful.  So I threw in a cup of butter and continued the simmer.  I took it until I thought if I simmered any further it would have too much of a burnt flavour.  But it was still too soft for toffee so my next goal was to make caramels.  I added a teaspoon of good quality vanilla extract and a cup of chopped pecans. 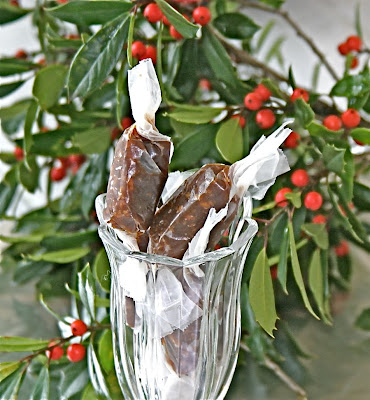 I poured the syrup into a pan hoping it would somewhat harden.  It did but was still too sticky.  The solution was to wrap each caramel in a piece of waxed paper.  This makes it easier to store and easier to eat.

Don't you love the holly in the picture?  I clipped it from shrubs in my garden.
Posted by Sarah at 7:17 PM

Email ThisBlogThis!Share to TwitterShare to FacebookShare to Pinterest
Labels: candy