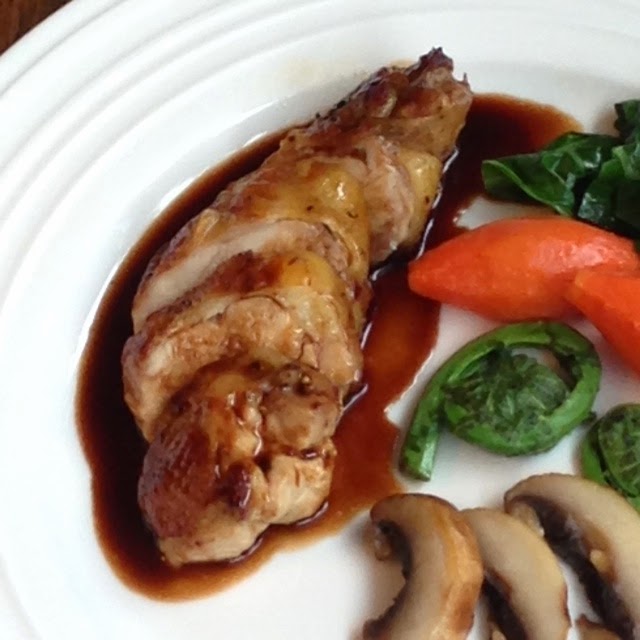 This month we are going to the Oscars. Food can be associated with most movies in one way or another. I like the real hard-core food movies. The only movie, not only foodie movie, but the only movie I saw this year was the One Hundred Foot Journey. It was nominated for the Golden Globes but didn't meet Oscar competition.

Anyhoo, we are here to sit down and enjoy more wonderful food.

I made the 'oh so' elegant Pigeonneau Fermier Roti aux Epices Douces. Yes, this translates as pigeon. The culinary world has chosen a more appealing moniker of squab. Wouldn't we rather eat squab than pigeon? Pigeonneau is a young pigeon.

This recipe was the test for the young Indian chef to work with restaurateur Helen Mirren. He earned the restaurant a third Michelin star.

These restaurants were literally across the street from each other, hence, the one hundred foot journey. He left his family's Indian restaurant to serve haute cuisine and move his career forward.

The sauce with this dish is dazzling. This will be on my fine dinner 'go to' list of choice. And it you think you can forget the madeira, in one word, don't. The subtle sweetness adds another layer of complexity to the flavour.

I did not find pigeon and used pheasant as a substitute. It was delicious.

Cranberry Orange Trifle by Val at More Than Burnt Toast. The movie inspiration is The Queen with Helen Mirren. She is popular. She is also the leading actress in One Hundred Foot Journey.

Fontal Polenta with a Mushroom Saute is Sandi's contribution from The Whistlestop Cafe. Her movie inspiration is Eat, Pray, Love.

Preheat oven to(400 °F). Melt the butter in a frying pan over high heat. Season pigeon halves with salt and pepper. Brown one side. Turn the halves over, and place the pan in the oven. Cook for 7 minutes.

Place the baked pigeon halves on a plate, tent with foil, and set aside to rest for five minutes. While the pigeon is resting, continue to reduce the sauce until thickened. Taste the sauce and season with salt, as required. Also, place the serving plates with the vegetables in the oven for a couple of minutes until the vegetables are reheated.

When the meat has rested, slice each half on the bias in four places. Arrange the pigeon slices on the serving plates. Top with the reduced sauce.

Scatter the vegetables over the bones and bake for an additional 15 minutes.

Transfer the cooked bones and vegetables to a saucepan. Add some water to the roasting pan and deglaze over heat. When all the caramelized partials are loose, transfer them along with the water to the saucepan.

Add sufficient water to the saucepan to cover the bones plus another 50 percent. Bring the water to a boil. Reduce heat to simmer. Simmer the contents for about 2 hours until the liquid is reduced by half. Skim any scum that forms on the surface. When reduced, strain the stock through a strainer and then through a chinois. Check the volume of the stock. If it is greater than about 200 milliliters, reduce further. Refrigerate strained stock until needed. Remove and discard any fat that congeals during cooling. 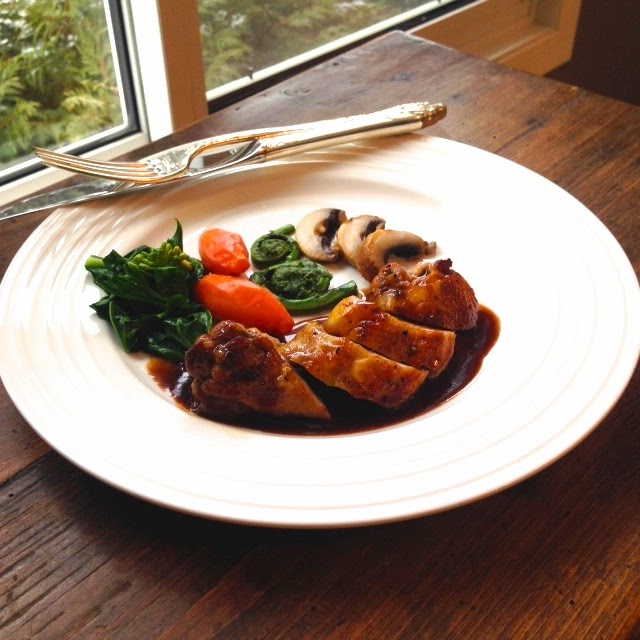 Sweat the shallot in butter in a saucepan over low heat.

Add the Madeira wine and reduce almost totally. Add the fond de pigeonneau and reduce substantially. Strain and return the sauce to the saucepan. Finish reducing the sauce per the main recipe.