Foraged and Local Food in Recipes 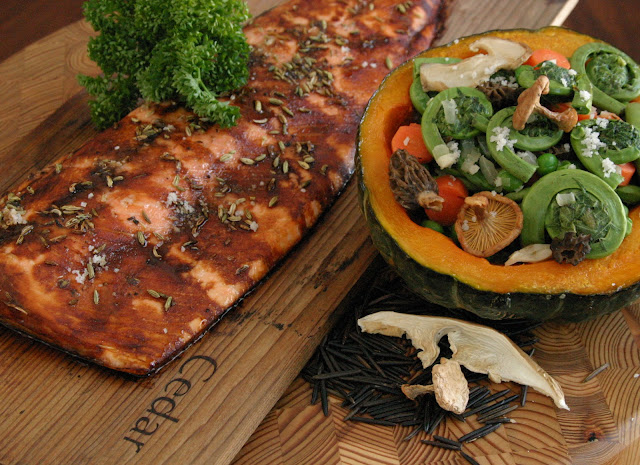 A food trend that is only going to gain momentum is the demand for local and Canadian grown and produced food. We have a bounty of good food in this country.

Last year I was on the Island and purchased the locally produced sea salt. Vancouver Island Salt Company (www.visaltco.com), located in the beautiful Cowichan Valley near Victoria, produces the only Canadian fleur de sel. I was curious and asked founder, owner and former chef, Andrew Shepherd, how he came up with the idea to produce sea salt. He says that it was a challenge from a friend over a cold beer. After the first batch he was hooked and he formed his company in 2010. 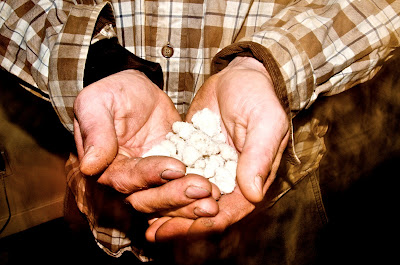 Andrew is self taught and makes infused salts alongside the basic sea salt. At the moment he is perfecting a blue cheese infusion and a mandarin orange and lime salt. They rely heavily on word of mouth to sell their products. He quickly adds that 95% of the fuel used to evaporate the salt water is recycled vegetable oil. 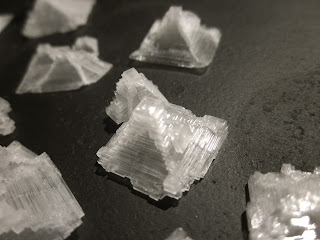 It was recently announced that he has been chosen as one of twenty food artisans from hundreds that applied from across Canada for the Ace Artisan Incubator as seen on the Food Channel. In June they will participate in a mentorship program in Toronto. They will learn more about branding, marketing and business planning and will be honoured at a showcase. Two will be chosen for further business development. Congratulations, Andrew. 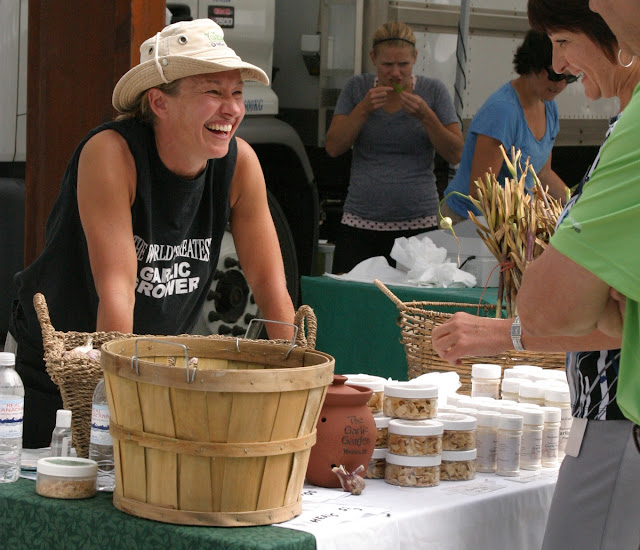 In Yorkton I met up with Anna and Darrel Schaab from The Garlic Garden (yorktongarlic.com) as they were harvesting scapes. Scapes are curly shoots that grow from the garlic stalk and must be removed so the heads develop fully. They have wonderful flavour and are also used in cooking.
Schaab’s purchased a small farm but couldn’t make it work with traditional grain farming. Bob, the local garlic grower, suggested they grow garlic and he became their mentor and taught them everything they needed to know. 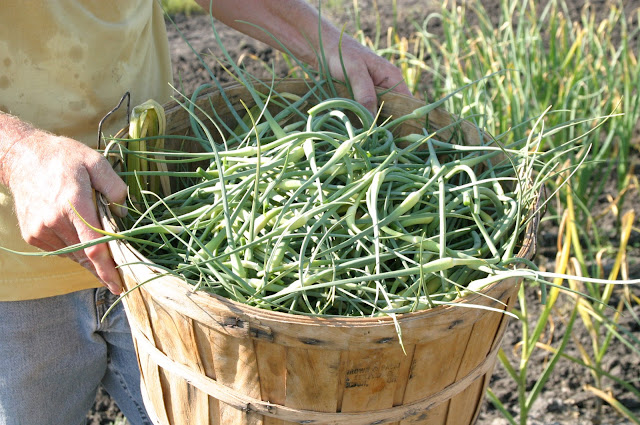 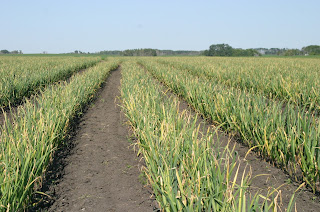 In the fall of 2005 they planted their first crop and the rest is history. On a typical day at the Saskatoon Farmers’ Market they sell 200 lb. of garlic. In addition they produce a variety of garlic products. They primarily grow a hard neck variety called Music. I still have some in my cold room from last summer’s harvest and it is firm and fresh. 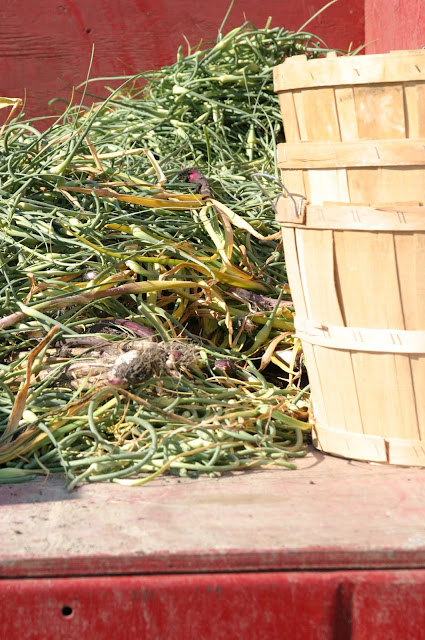 A most unusual business is Prairie Infusions (www.prairieinfusions.com) in Love, SK. The website says, “We specialize in the wild harvest of non-timber forest products in Saskatchewan. We forage for science, retail, industry, gastronomy, and individuals.” 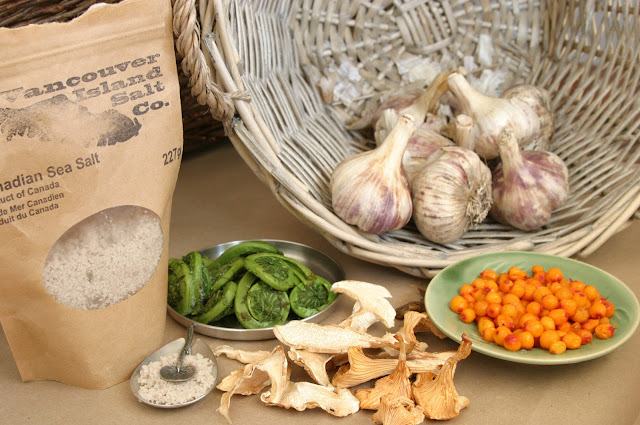 As I catch up with owner and founder Elisabeth Poscher, a University of Arizona trained scientist, she is still foraging in the winter weather. What do you find in the winter? “Right now we are picking balsam poplar buds and chaga, a rare type of mushroom. Soon it will be maple and birch syrup season.”
In her own words, “I am fascinated, almost obsessed, by drylands such as the Prairies, and Saskatchewan for me was love at first sight. I've made my passion my business while at the same time making my tiny contribution to a more peaceful and healthy world.”
I am curious how she finds the mushrooms, fiddleheads and a large menu of other plants. She says that she uses flora and fungi identification literature, herbaria, libraries, maps, microscope and spore prints as research tools for her quest and she applies her training and expertise.
Fiddleheads are the unfurled fronds of the ostrich fern and get their name because they resemble the head of a fiddle. They are foraged in cool, moist forest areas during late April and May. They have a delicate green flavour and best served simply with butter or olive oil, a sprinkling of sea salt and a squeeze of lemon. Use with pastas, quiche or omelets.
They are an excellent source of beta carotene, niacin and Vitamin C and are low fat and calories.
According to Health Canada, fiddleheads must be cooked before eating. Steam or boil until crisp tender and serve hot or chill in ice water to use in salads. They can be frozen by blanching for 2 minutes, chilling and draining well before packing into freezer bags.
Several varieties of wild mushrooms are foraged. The season is late summer and early fall. Because they have a short shelf life, the mushrooms are dried. The flavour is intensified and they need to be reconstituted in liquid before using.
Vegetable Ragout
fiddleheads
1 small squash
carrots, sliced into rounds
shelled fresh peas
unsalted butter
shallots
thyme sprigs or dried thyme
1 bay leaf
dried wild mushrooms
reserved mushroom broth
garlic, minced
sea salt
freshly ground black pepper
There are no amounts listed. Use what you like best and for the number of people being served. Estimate 1 c. (250 mL) per person. Leftovers can be refrigerated.
Cut squash in half and scoop out seeds. Spray lightly with oil, season with sea salt and place cut side down on a baking sheet. Bake at 350F (175C) for 25 minutes or until fork tender. Set aside.
Hydrate dried mushrooms in boiling water to cover for at least 20 minutes. Reserve the flavour rich water to use in this recipe.
In a pot of salted water boil the fiddleheads until crisp tender, approximately 4 minutes if fresh or 2 minutes if frozen. Drain and add to a bowl of ice water to stop the cooking, then drain on paper towels. Boil the carrots in the same manner for 3 minutes and chill.
In a large heavy skillet combine butter, shallots, garlic, thyme, bay leaf, roughly chopped mushrooms, some broth, and salt and pepper to taste and simmer the mixture, uncovered, for 5 minutes to reduce slightly if too much liquid.
Add fiddleheads, carrots, peas and more broth or water, if necessary. Simmer mixture, for 1 minute. Discard the bay leaf and season with salt and pepper.
Serve in baked squash.
Cedar Planked Steelhead Trout with Birch Syrup
cedar plank
fillet of salmon, steelhead trout or Arctic char, skin on
olive oil
birch syrup
sea salt
fennel
poplar buds or juniper berries, optional
Soak plank overnight.
Preheat oven to 425 F (215 C).  With a mortar and pestle, grind sea salt, fennel and poplar buds or juniper berries.
Pat fillet dry with paper towels. Rub with olive oil and season with salt mixture, then drizzle with birch syrup. Refrigerate for 30 minutes.
Meanwhile preheat plank in oven until smoking hot. Brush with olive oil.
Lay marinated salmon, skin side down, on plank. Return to hot oven and bake about 10 minutes per inch or until almost cooked to medium in the thickest part. Do not overcook. It will continue to cook after removing from oven. Salmon cooked to medium is very moist, tender and full of flavour.
This can also be done on the barbecue using the same procedure. Don’t worry if your plank smoulders. The smoke will add another dimension to the flavour.

Notes on Cedar Planks
Cedar planks can be purchased at cooking stores. You can also make your own by simply cutting a piece of 2” x 8” cedar to a length that will fit in your oven or barbecue. Be sure it has not been chemically treated.
Notes on Birch Syrup
1c. (250 mL) of birch syrup requires 6.6 gal (25 L) of birch sap. It is twice as much work as making maple syrup. It is comprised of two sugars, fructose and glucose. The flavour is much less sweet than maple syrup and more like a balsamic vinegar reduction. It has many nutrients and is considered to be beneficial in the treatment of arthritis, muscular pain, hypertension, tendonitis, and an immune system support for geriatric patients.