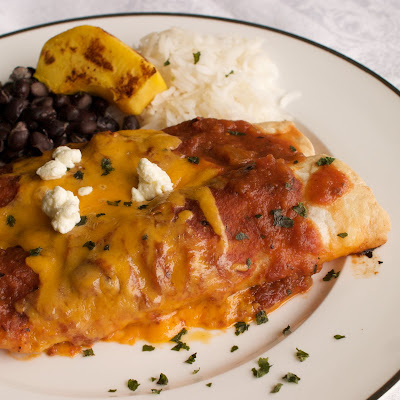 It is Daring Cooks time again.  It seems to come earlier every month!  May is the month of Cinco de Mayo, a regional holiday in Mexico.  In celebration, our hosts chose a Mexican theme.  I love Mexican food.  The dish chosen is rather high in calories so I am making a leaner version - chicken enchiladas.  It might be leaner in calories but not in flavour.  I am also making my own flour tortillas.  The recipe is below.

The tortillas were absolutely fantastic.  Not exactly round, but tasty!

Our hosts this month, Barbara of Barbara Bakes and Bunnee of Anna+Food have chosen a delicious Stacked Green Chile & Grilled Chicken Enchilada recipe in celebration of Cinco de Mayo! The recipe, featuring a homemade enchilada sauce was found on www.finecooking.com and written by Robb Walsh. 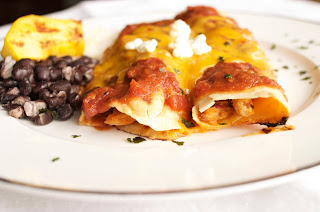 Heat heavy large skillet over medium-high heat 2 minutes.  Add all chile pieces; cook just until chiles blister, pressing with metal spatula and turning occasionally, about 30 seconds.
Transfer chiles to a bowl; add 5 cups very hot water.  Soak chiles until very tender, pushing occasionally to submerge, about 30 minutes.
Working in 3 batches, puree chiles with soaking liquid and all remaining ingredients in blender until smooth.  Season sauce with more salt if desired.  (Can be made 1 day ahead.  Cover and refrigerate.) 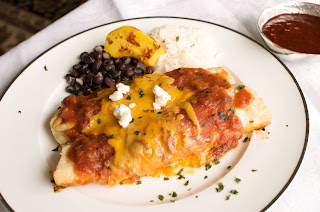 
Bring first 5 ingredients to boil in large pot.  Reduce heat; simmer gently until chicken is cooked through, about 30 minutes.  Cool chicken in broth 30 minutes, then transfer chicken to bowl and cool completely (reserve broth for another use).

Wrap flour tortillas in aluminium foil and warm in the oven.

Remove tortillas from foil one at a time.  Hold one in the palm of your hand and put about 1/2 cup of the chicken mixture in it and roll up.  Place in a greased ovenproof dish, seam side down.  Continue until you have made the number of enchiladas that you need.

Pour some of the Ancho-Guajillo sauce over the rolled enchiladas.  Top with grated cheddar or Monterey Jack (or both) cheese.  Bake until bubbling and cheese is melted.  This will take about 40 minutes.

Remove from the oven and top with sliced pickled jalapenos and crumbled queso fresco. 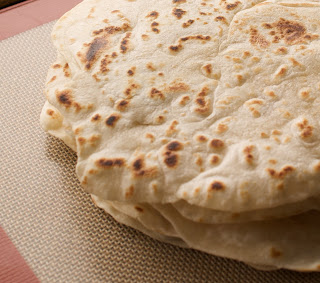 (Watch the detailed video of her making the tortillas.)

I found this recipe for tortillas on Memoria's blog Mangio da Sola.  Since she is from Texas and is the reigning queen of Tex-Mex, I didn't think I could do better.

Cooks Notes:The tortillas should be soft and bubbly. I think the key to a good tortilla is to mix/stir the dry ingredients (even though she stated not to do so), and break in the shortening. Next start the mixer and then add the hot water as it mixes. The dough should be wet but not too wet (I usually use all of the water in the recipe). Don't forget to let the dough sit for 30 minutes before rolling the dough. You should be able to roll it in a ball easily. I also add an extra 1/2 tsp of baking powder to ensure rise. Also, don't let it heat up too long the first time you put it on the comal or skillet. The first exposure to heat is the most important part, I think. Flip it over as soon as you see a few bubbles.

Make ahead: Roll out all the dough balls and place between wax paper. Then place the wax papered tortillas in a freezer bag for later use. When ready to make them, just take them out and heat them on the comal or skillet.

3 ½ cups of all purpose flour
1 tsp salt
½ tsp baking powder
7/8 cup (or a little less than 1 cup) of lard or shortening, cut into small pieces
¾ to 1 cup of very hot water (almost boiling)

2. Add the salt, baking powder, and fat without stirring.

3. Little by little, pour the very hot water over the ingredients and mix them with your hands (or dough attachment in your stand mixer), measuring the quantity of water until you reach the desired texture. It should be moist and soft, but not sticky.

4. Knead/Mix the dough for approximately 5 minutes, and form a ball.

5. Cover the dough with a kitchen towel, and allow it to rest inside of the bowl for 15 to 20 minutes. 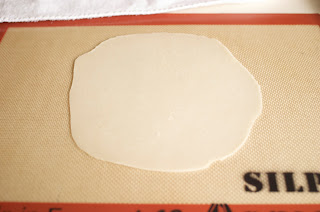 6. Form small balls weighing approximately 40 grams each (if you don't have a scale, the balls should be more or less the size of a ping-pong or golf ball). Cover the little balls again with the towel as you roll each one out.

7. Place one of the balls on top of a clean surface, and press down on it lightly with your fingers.

8. Roll out the little ball until you form an oval. Lift up the oval and turn it to the right 45 degrees, and roll it out again. Turn it 45 degrees again to the right until you create a circle of the desired size. 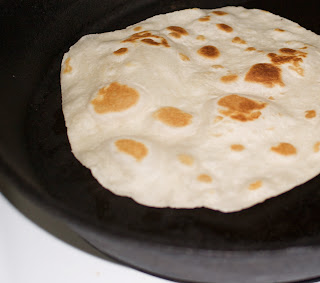 9. Place the tortilla on a hot comal, griddle pan, or cast-iron skillet until it forms small bubbles on the uncooked side of the tortilla. Turn over the tortilla, and wait until it inflates a bit. Turn it again and with a spatula, press on it until the air inside goes out and stops inflating (I didn't do this last part because it stops puffing up once you remove it from the heat).

10. Store the tortillas in tortilla holder, covered container, or wrapped in a towel. You could also keep it warm in a low-temperature oven. These tortillas can be reheated the next day; store them in the refrigerator for up to a week.

Yields 18-20 tortillas; this recipe can be halved easily.
Posted by Sarah at 8:00 AM